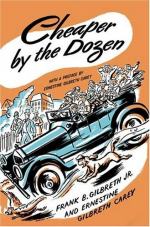 Frank Bunker Gilbreth, Sr.
This Study Guide consists of approximately 32 pages of chapter summaries, quotes, character analysis, themes, and more - everything you need to sharpen your knowledge of Cheaper by the Dozen.

Cheaper by the Dozen Summary & Study Guide includes comprehensive information and analysis to help you understand the book. This study guide contains the following sections:

This detailed literature summary also contains Topics for Discussion and a Free Quiz on Cheaper by the Dozen by Frank Bunker Gilbreth, Sr..

Cheaper By the Dozen, written by siblings Frank B. Gilbreth Jr. and Ernestine Gilbreth Carey, tells the tale of Lillian Moller Gilbreth, Frank Bunker Gilbreth and their progeny. Life is never dull with a dozen children in the house, and the book is filled with delightful adventures and lessons learned in this loving household.

Frank and Lillian are industrial engineers who specialize in motion study. Frank is particularly obsessed with finding the most efficient ways to complete tasks in life and often uses his children as case studies. Lillian is a psychologist who factors human emotions into the science of the mechanics of motion study.

This novel takes an in-depth look into the children's upbringing, focusing primarily on Frank's influence on the family. It highlights family dynamics in annual births, car trips, and summer vacations. The book begins with an introduction to Frank and Lillian, highlighting how much they love children and how they plan to have a big family of six boys and six girls. This actually happens.

As the children grow, they are taught to behave differently from children in smaller households. For example, they all have to come running when the father whistles. While this might seem autocratic, Frank made it a game and frequently slipped them treats upon assembly. It's one of many examples where practical parenting that might seem over-the-top to a reader is acceptable due to the way it is carried out and because of the love behind the parenting.

The family doesn't lack for funding, thanks to Frank's role as an efficiency expert working for major industrial plants in Germany, Britain, and the United States. While they have sufficient funds, the children are raised to be hard workers and to respect those that work for them. Lillian came from a wealthy background, and her parents live across the country in California. When the children meet her part of the family, they are surrounded by the finer things in life, yet the focus of all get-togethers is not on wealth, but rather on love.

Schooling is addressed in the book, both in the home and in educational institutions. Frank is very creative in ways he can help his children learn about the world from a very young age. He is always pushing the children to advance academically, staying ahead of their peers. Frank does this by surrounding the children with educational games and by creating learning opportunities for them. He is also very involved in their school life, even going in to sit in on classes unexpectedly.

When the children get older, the book addresses the change in attitude between the parents and children. Values are different, and it's challenging to keep up with the changing times, especially with so many children. This novel addresses the issue and shows the changes both from the parents' vantage and the children's. When hardship befalls, the book clearly demonstrates growth in the family members as they stick together and overcome adversity.

More summaries and resources for teaching or studying Cheaper by the Dozen.

Cheaper by the Dozen from BookRags. (c)2022 BookRags, Inc. All rights reserved.