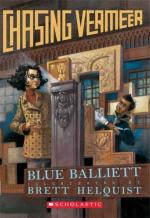 Blue Balliett
This Study Guide consists of approximately 26 pages of chapter summaries, quotes, character analysis, themes, and more - everything you need to sharpen your knowledge of Chasing Vermeer.

This detailed literature summary also contains Topics for Discussion and a Free Quiz on Chasing Vermeer by Blue Balliett.

"Chasing Vermeer" is a fictional book that teaches young readers about art, writing, math, and history in a way that is fun and exciting. Through an art theft and other mysterious happenings, the main characters, Petra and Calder, become friends, grow to be more courageous, and solve an art crime.

The book opens as three unknown individuals receive letters from an unknown individual asking them for help in correcting a crime involving art. This letter threatens them, telling them that if they go to the authorities, their lives will be in danger. The next chapter introduces the two main characters, Calder and Petra. They are eleven year old students at the University School, located near Chicago. They are both unique, intelligent, and have an interest in patterns and the world around them. After seeing Ms. Hussey buying books about crime and art and then reading about the theft of Vermeer's The Lady Writing, they begin to worry that their teacher is somehow mixed up in this theft. Soon many of those they care about are possible suspects, so they decide they should help to solve this crime.

As these two children become deeply immersed in this mystery, they are flooded with so many possible clues and connections that they wonder how they will ever know which clues are actually significant. Through the help of a book called "Lo!" by Charles Fort, Calder's pentominoes, and The Lady from the painting found in Petra's dreams, the children discover that the painting most likely is on their school's grounds. After searching several of the buildings, they intuitively decide that the best place for the painting to be hidden would be in Delia Dell Hall, a beautiful old building whose many details resemble those in Vermeer's paintings.

Once the painting is found hidden in a wall in a stairwell, Calder and Petra run for their lives as alarms scream behind them. Soon they realize they are being followed by a man. Through Calder's bravery, Petra is able to escape from the chasing man but soon loses the painting as she and a police officer search for Calder. Once again, through intuition, Petra reclaims the painting and finds an injured, but alive, Calder.

At the end of the story, the author explains and gives many clues and coincidences found in this book. As she had stated in her introduction at the beginning of the book, the clues found in this book would resemble those found when playing with pentominoes. Clues would appear seemingly at random, and at the end the clues would come together to solve the puzzle. The book ends as the painting is restored to the museum, the crime against Vermeer described at the beginning of the book is rectified, and the main characters and those to whom they are close are safe.