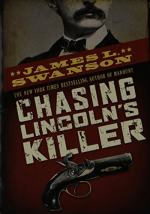 James L. Swanson
This Study Guide consists of approximately 44 pages of chapter summaries, quotes, character analysis, themes, and more - everything you need to sharpen your knowledge of Chasing Lincoln's Killer.

“Chasing Lincoln's Killer” is the story of the assassination of Abraham Lincoln. Lincoln was the United States President during the Civil War, which was a very turbulent time in America's history. The majority of the American people had very strong feelings, either in favor of Northern policies or for the Southern cause. John Wilkes Booth was one of those people. Despite the fact that Booth lived and worked in the North, he was a firm supporter of the Confederacy. He hated Lincoln and Lincoln's policies.

Booth believed that Lincoln was the key to winning the Civil War for the South. He and some like-minded people planned to kidnap Lincoln several months before the assassination. Their plan was to take him to the South and trade him for Southern prisoners or for concessions that would help the South win the war. That plan failed.

Booth was a famous actor and could have walked into Lincoln's office at almost any time. He could have shot Lincoln during Lincoln's second inauguration. While Booth wanted to help the South win the war, he also wanted to get escape punishment. When the South formally surrendered, making it clear that the South was going to lose the Civil War, Booth was spurred into action. He felt that killing Lincoln might prompt the Confederate soldiers to continue to fight.

Booth was well-known at Ford Theatre but he didn't have a role in the play that was being performed on that fateful Friday night. He found out that the Lincoln's planned to attend the play, “Our American Cousin,” and gathered three men to help him with a bold plan. Booth planned to kill Lincoln while sending three others to kill Vice-President Johnson and Secretary of State William Seward. Booth believed that the triple assassination would cripple the Union government.

Booth entered Lincoln's theater box and shot Lincoln in the head with a Derringer. He then scuffled with the Lincoln's guest for the performance, Major Rathbone. When Booth jumped to from the box to the stage, Rathbone threw him off-balance. Booth broke his leg which greatly slowed his escape and contributed to his capture.

An Army surgeon, Dr. Leale, was in the audience and he rushed to Lincoln's side. He knew almost immediately that Lincoln would die from the wound. Dr. Leale had Lincoln's body taken from the theater and they wound up at the Peterson House, a nearby boarding house. Lincoln died a few hours later.

Booth's co-conspirators were not as successful. One of them failed to kill his target and the other simply backed out of even trying. Booth managed to escape into the countryside but only one of the men, David Herold caught up to Booth. The two men went into hiding while Secretary of War Edwin Stanton set out to find Lincoln's killer. Booth was quickly identified as the murderer and a group of his co-conspirators were named. Two of the men were captured quickly but Booth managed to evade the hunters for 12 days.

Members of a Calvary unit surrounded Booth in a tobacco shed at a farm in the countryside across the Potomac River. Herold surrendered but Booth refused. An officer ordered the shed set on fire but Booth continued to refuse to leave the building. A non-commissioned officer named Boston Corbett slipped up to the barn and shot Booth through a gap in the boards. Booth was paralyzed but lived long enough for the soldiers to drag him from the shed. The other members of the plot, including a woman who had provided aid, were hanged a short time later.