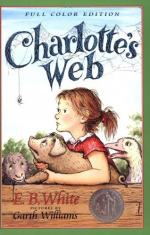 E. B. White
This Study Guide consists of approximately 27 pages of chapter summaries, quotes, character analysis, themes, and more - everything you need to sharpen your knowledge of Charlotte's Web.

Wilbur is a young pig who was born the runt of his litter. When Fern discovers her father about to kill the piglet, she convinces him to let her take it into her care. Fern raises Wilbur on a baby bottle until he is a few weeks old, when Mr. Arable tells Fern they must sell the piglet. Wilbur is sold to Fern’s uncle, Mr. Zuckerman, for six dollars.

Mr. Zuckerman allows Fern to visit Wilbur, which she does daily, sitting by his pigpen in Mr. Zuckerman’s barn cellar. Wilbur is a rambunctious and curious pig, and eventually befriends the spider, Charlotte, whose web sits above his pen. When Wilbur discovers from the other barn animals that the Zuckermans intend to kill him for Christmas dinner, he becomes overwrought with despair. Charlotte reassures Wilbur she will help to save his life.

In the next weeks, Charlotte...

More summaries and resources for teaching or studying Charlotte's Web.