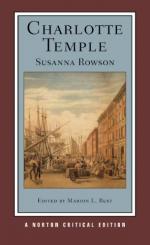 A picturesque town in the south of England near Portsmouth, Chichester provides the opening scene for the novel. Mme. Du Pont is leading the girls of her school out of church when two army officers on leave admire them.

Eustatia is an island of the British Virgin Islands, where Lt. John Montraville is deployed with his New York Army company shortly after marrying Julia Franklin. Whether Julia accompanies John is left ambiguous.

Ireland is the site of Lt. George Temple's deployment at the time his supposed friend forecloses on the loan that buys him his army commission.

Ludgate Hill is the site of the famous prison in London in which Capt. Eldridge, protagonist Charlotte Temple's grandfather, is incarcerated for debt.

The girl's boarding in which protagonist Charlotte Temple is being educated at the beginning of the novel, Madam Du...