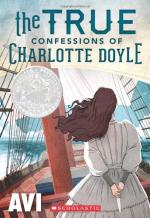 Avi and Edward Irving Wortis
This Study Guide consists of approximately 55 pages of chapter summaries, quotes, character analysis, themes, and more - everything you need to sharpen your knowledge of The True Confessions of Charlotte Doyle.

1. What was the Atlantic sea trade like in 1832? What sort of goods were transported? Why would it take two months for a ship like the Seahawk to sail from England to America?

2. The Seahawk is a brig. What were brigs used for in 1832? Where were they built? Who built them?

4. How many female sailors were there in the Atlantic in the 1830s? What were they like?

5. Charlotte spends much time learning how to handle the rigging on the Seahawk. Describe the ropes and the sails and explain the purpose of each.

6. What were the laws governing the conduct of captain and crew on a merchant ship in the 1830s? Did captains have as much power as Jaggery claims?

7. What sort of future can Charlotte look forward to, assuming she is not...

More summaries and resources for teaching or studying The True Confessions of Charlotte Doyle.