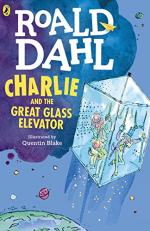 Related Topics
Ah, Sweet Mystery of Life: The Country Stories of Roald Dahl
Charlie and the Chocolate Factory
Collected Stories
James and the Giant Peach
Lamb to the Slaughter
Matilda
My Uncle Oswald
Roald Dahl
Tales of the Unexpected (book)
The Best of Roald Dahl
The BFG
Danny the Champion of the World
Fantastic Mr. Fox
George's Marvelous Medicine
The Twits
Skin (Roald Dahl)
Beware of Dog
The Way Up to Heaven
The Umbrella Man
Kiss Kiss

Roald Dahl
This Study Guide consists of approximately 40 pages of chapter summaries, quotes, character analysis, themes, and more - everything you need to sharpen your knowledge of Charlie and the Great Glass Elevator.

This detailed literature summary also contains Quotes and a Free Quiz on Charlie and the Great Glass Elevator by Roald Dahl.

The following version of the book was used to create this study guide: Dahl, Roald. Charlie and the Great Glass Elevator. Alfred A. Knopf, Publisher, 2001. The illustrations are by Quentin Blake, 1998.

This study guide is based on the 2001 hardcover edition of Charlie and the Great Glass Elevator, a work of fiction by Roald Dahl. The subtitle is The Further Adventures of Charlie Bucket and Willy Wonka, Chocolate-Maker Extraordinary.

The book picks up after Charlie and the Chocolate Factory. The action begins just after Willy Wonka, owner of the famous Chocolate Factory, had announced that Charlie, a polite, unassuming boy, would inherit the factory upon Wonka's impending retirement. All of his family came out to the factory and gathered into the Great Glass Elevator to become a part of Charlie's new life. This included Charlie's Grandpa Joe, who was always more than willing to share in Charlie's adventures. He was a kind and loving man, who acted younger than his years. It also included Charlie's parents, Mr. and Mrs. Bucket, who were mostly unhappy. Also along for the ride were his three other grandparents, who never got out of bed. They acted older than their years. Still, they all fit into the huge, clear elevator. They even pushed the bed onto the elevator so that the three other grandparents, collectively known as the Old Ones, did not have to leave the bed.

The elevator was full of buttons that could make it do fantastic things. It took off through the roof of the factory. It was not attached to any rails or pulleys. Rather, it floated through some unseen means. Wonka's plan had been to go so high that he could crash land back into the factory in another spot. However, one of the old ones distracted him, and he did not pull the elevator back in time. It took them into space where they encountered a spaceship hotel. This was a huge building floating through space, with all the amenities of a ritzy hotel. It was being attacked by evil aliens, the Vermicious Knids. These creatures could change their shape as if they were made out of clay, and they liked to eat people. Wonka and company outsmarted them and they saved a spaceship full of hotel employees commuting there. The Knids wound up burning up in Earth's atmosphere, becoming little fireballs, like shooting stars.

During this adventure, the president of the United States watched on cameras from the spaceship. He was thoroughly confused by the big, see-through rectangle with eight people on board, some of them in their nightshirts. At first, he assumed they were from an enemy country, or perhaps they worked for Hilton hotels. Later, he came to the conclusion that Wonka and friends were aliens, too. After the hotel commuters were rescued, he figured the people in the elevator were brave astronauts. The president was surrounded by trusted advisers, although all of them were pretty incompetent.

The elevator crash landed back into the Chocolate Factory. The group found themselves in the chocolate room, where a jungle made of chocolate filled the room. They were surrounded by Oompa-Loompas, who were very small people who helped Wonka in the factory.

Since Charlie was going to take over the factory, Wonka assumed that the rest of his family would want to help. Grandpa Joe agreed to help; Charlie's parents were worried; the old ones did not want to leave the bed. Wonka offered them some Wonka-Vite, a miraculous vitamin. Each pill would reduce one's age by 20 years. A year would tick away every second. The old ones got greedy, though. They each gulped down four pills. It turned the two oldest grandparents into babies. The youngest, Grandma Georgina, was only 78, so she became -2. She disappeared.

Wonka asked Charlie if they should go save her, and he said they should. Wonka deferred to Charlie because Charlie was the rightful owner of the Chocolate Factory at this point. Charlie said they should risk their lives to help Grandma Georgina, because it was the right thing to do. It was about this point in the book that Wonka gave up some of his control of the situation and let Charlie do what needed to be done. It was like a torch was being passed.

The two of them got back into the elevator. Wonka and Charlie left the other adults behind to care for the babies, with help from the Oompa-Loompas. With just the two of them, there was no one to tell them they could not do things, and no one to argue with them. They worked very well together. Wonka steered the elevator to Minusland, where people go when they have been minused. It was a gray, dreary world of mists. It was inhabited only by people who have been minused. Gnoolies also lurked here. They were invisible creatures that could turn you into a Gnoolie with one bite. Fortunately, they found Grandma Georgina pretty quickly, before they encountered any Gnoolies. She was partially transparent, and Charlie's hand was able to go right through her. Wonka sprayed her with a liquid that would age her, called Vita-Wonk. She faded out completely. Wonka said that she would have reappeared back in the Chocolate Room.

They headed back and there she was, in bed, but she was now more than 300 years old. They had to give her enough Wonka-Vite to reduce her age again, and they got her back to 78 again. Then, Wonka administered Vita-Wonk to the babies to bring them back to their old ages again. There had been some protesting from Mr. and Mrs. Bucket, because they were worried about what these chemicals could do. Ultimately, they were talked into letting Wonka use them.

Then, there was much commotion from the Oompa-Loompas. A helicopter had landed near the factory. A letter from the president was brought in. It said that the astronauts who rescued the space hotel employees were tracked to the factory. They were all invited to be his guests at the White House. At this, even the Old Ones jumped out of bed and ran to the helicopter. The parents were excited, too. Charlie, Wonka, and Grandpa Joe happily went off on their next adventure.

The book serves as Dahl's attempt to address two different readers. For children, he tells a fantasy-filled yarn with space aliens, strange worlds, and stranger people. For adults, he picks fun at politicians, lazy people, and people who are either stupid or cowardly. There is a fair bit of moralizing. Adults will be able to read between the lines. Some lessons children will be able to pick up easily, while some of them are more subtle.

The book is full of illustrations by Quentin Blake. There could be several drawings in just one five page chapter. Blake's characters are full of energy. There is not much detail in his drawings, but the frenetic quality matches the whimsical storytelling.

More summaries and resources for teaching or studying Charlie and the Great Glass Elevator .