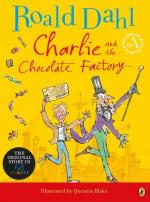 Roald Dahl
This Study Guide consists of approximately 46 pages of chapter summaries, quotes, character analysis, themes, and more - everything you need to sharpen your knowledge of Charlie and the Chocolate Factory.

Charlie and the Chocolate Factory Summary & Study Guide includes comprehensive information and analysis to help you understand the book. This study guide contains the following sections:

This detailed literature summary also contains Quotes and a Free Quiz on Charlie and the Chocolate Factory by Roald Dahl.

The following version of this book was used to create the guide: Dahl, Roald. Charlie and the Chocolate Factory. Alfred A. Knopf, 1964.

Dahl’s novel is divided into 30 short chapters, each of which is numbered in the title. The chapters progress in chronological order, beginning with the introduction of the entire Bucket family at a moment in time and ending with the Bucket family’s lucky break in owning Wonka’s Chocolate Factory. The novel is written in the third-person voice, with Charlie Bucket as the protagonist of the story. The narrative follows events which directly affect Charlie.

This guide divides up the thirty chapters into six sections comprising five chapters each. These sections act as large ‘parts’ of the book, encompassing major events and developments and dividing up the otherwise ceaseless flow of events.

Chapters 1-5 introduce the members of the Bucket family and describe their poverty. Charlie and Grandpa Joe stand out as main characters, with the majority of this section involving Grandpa Joe’s story-telling about Mr. Willy Wonka’s Chocolate Factory, which is a mystical place to Charlie. The final chapter of the section ends with the announcement that the mysterious Mr. Wonka is hosting a contest where five Golden Tickets will be hidden in his famous chocolate bars for five lucky winners to find: the ticket-holders will be given a tour of his factory, which has been closed to the public for years.

Chapters 6-10 describe the events after Mr. Wonka’s contest is announced, in which several children find Golden Tickets while Charlie is increasingly disappointed, since his family cannot afford to buy many chocolate bars the way others can. His birthday comes and goes and still he does not have a ticket, meanwhile Mr. Bucket is left unemployed and the family suffers more than ever. The final chapter of this section ends with Charlie walking home after school and miraculously coming across a whole dollar bill, which he plans to use to buy chocolate and help his family.

Chapters 11-15 describe Charlie’s special moment where he finds a Golden Ticket in a chocolate bar he bought with his dollar. The special moment makes his whole family happy, and they elect Grandpa Joe to accompany Charlie on the tour of Wonka’s Factory. The ticket-holders meet in front of the factory and are introduced to Mr. Wonka. The group is composed of Augustus Gloops and his parents, Violet Beauregard and her parents, Veruca Salt and her parents, Mike Teavee and his parents, and Charlie and Grandpa Joe. Mr. Wonka begins their tour with the Chocolate Room, a special room made entirely of edible materials, where they meet the Oompa-Loompas who are Mr. Wonka’s sole employees.

Chapters 16-20 describe the history of the Oompa-Loompas and the antics of Augustus Gloop who, leaning too far out into the chocolate river, falls in and is removed from the tour. The group proceeds without him to an Inventing Room, where Violet discovers a special kind of chewing gum Mr. Wonka has been developing.

Chapters 21-25 explain how Violet steals a piece of experimental gum and eats it, turning into a giant blueberry and being removed from the tour. Then, Veruca Salt greedily tries to grab one of Mr. Wonka’s special walnut-tapping squirrels and is attacked and dumped into a garbage chute by the squirrels. Thus, only Mike Teavee and Charlie remain as prized members of the tour. They continue on to another room called the Television Chocolate Room.

Chapters 26-30 are the final chapters of the book, in which Mike Teavee tries to abuse Mr. Wonka’s special machinery and ends up shrinking himself. He, too, has to leave the tour, thus Charlie is the sole remaining ticket-holder. Mr. Wonka is delighted and explains to Charlie that he planned to bestow his entire factory to the best child on the tour, which Charlie evidently is. Charlie and Grandpa Joe are ecstatic, and they travel to their cottage with Mr. Wonka to tell the Bucket family the good news.

More summaries and resources for teaching or studying Charlie and the Chocolate Factory.

Charlie and the Chocolate Factory from BookRags. (c)2022 BookRags, Inc. All rights reserved.