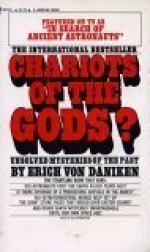 Chariots of the Gods: Unsolved Mysteries of the Past Summary & Study Guide

Erich von Däniken
This Study Guide consists of approximately 27 pages of chapter summaries, quotes, character analysis, themes, and more - everything you need to sharpen your knowledge of Chariots of the Gods.

Chariots of the Gods: Unsolved Mysteries of the Past Summary & Study Guide Description

Chariots of the Gods: Unsolved Mysteries of the Past Summary & Study Guide includes comprehensive information and analysis to help you understand the book. This study guide contains the following sections:

This detailed literature summary also contains Topics for Discussion and a Free Quiz on Chariots of the Gods: Unsolved Mysteries of the Past by Erich von Däniken.

Erich von Däniken's Chariots of the Gods offers the controversial hypothesis that primitive mankind was visited by extraterrestrial alien astronauts who provided early humans laws, technology, and knowledge. These strange spacemen were revered as "gods" by the primitives, and as a result, much primitive art, masonry, and texts depict and reflect upon this visitation.

Using this hypothesis as a touchstone, Von Däniken systematically explores questions and unexplained circumstances in archaeology primarily, but also in biology, ancient literature, exobiology (the study of alien life) and astronomy. From the Mayan calendar's uncanny astronomical accuracy, to the ancient maps of Piri Reis, which appear to have been charted from an impossible height, to huge stone monuments that even modern-day construction equipment could not move, to seeming impossibilities in the construction of the Egyptian pyramids, and to batteries and platinum flying in the face of the limits of primitive technology, Von Däniken takes the reader on a trip around antiquity, offering explanations for these facts in light of his alien astronauts theory.

The author also spends much of the book offering interpretations of passages in ancient literature in light of his hypothesis. The first book of the Bible, Genesis, for example, speaks of "sons of God" who were giant in size. This and a multitude of "giants" being mentioned in nearly every culture's mythology lead Von Däniken to suspect these "giants" were in fact alien astronauts who interbred with the human species to initiate civilization. Similarly, Von Däniken veers from tradition when he interprets the destruction of Sodom and Gomorrah as a nuclear explosion and the biblical Flood as an experiment in "selective breeding" by aliens attempting to perfect the human race. Von Däniken offers interpretations for other texts, like the Sumerian Epic of Gilgamesh and the Indian epic Mahabharata, all fitting his hypothesis of ancient space travelers.

Von Däniken takes particular care in exploring remaining questions about ancient buildings. Heavy skepticism is lent to the notion that the Egyptians built their fabulous pyramids with only slaves and existing craftsmen. Lack of trees for wooden rollers and the extraordinarily precise joining of stones are but two features of the pyramids' construction that has the author looking skyward for the "true" architects.

Throughout, Von Däniken urges the scientific community to shed its prejudice and become open to the possibility of an ancient astronaut visit, at which point the author believes true scientific inquiry and research can replace worn-out and erroneous assumptions about ancient cultures, arts, and texts. The author also urges mankind to continue its exploration of space because perceived overpopulation, food shortages, energy shortages, and the eventuality of a catastrophic or cosmic event (such as the Sun dying) all point to the need to inhabit another planet or planets if mankind as a species is to survive.

More summaries and resources for teaching or studying Chariots of the Gods: Unsolved Mysteries of the Past.

Chariots of the Gods: Unsolved Mysteries of the Past from BookRags. (c)2021 BookRags, Inc. All rights reserved.