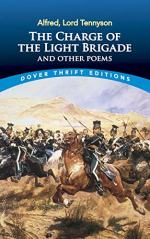 Alfred Tennyson, 1st Baron Tennyson
This Study Guide consists of approximately 34 pages of chapter summaries, quotes, character analysis, themes, and more - everything you need to sharpen your knowledge of The Charge of the Light Brigade.

Then: Victoria's rule as Queen of Great Britain and Ireland, and Empress of India, influenced all aspects of economy and society.

Now: The Royal Family of Great Britain holds only symbolic power and is as much a source for scandal as for inspiration.

Then: William Russell of the London Times serves as the first real war correspondent, relaying information, including stories about the army's problems, to the English public.

Now: All major U.S. television networks have correspondents stationed in Kuwait, allowing them to offer live coverage of the Persian Gulf War of 1991.

More summaries and resources for teaching or studying The Charge of the Light Brigade.

The Charge of the Light Brigade from Gale. ©2005-2006 Thomson Gale, a part of the Thomson Corporation. All rights reserved.