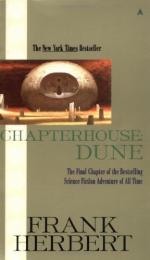 This detailed literature summary also contains Topics for Discussion and a Free Quiz on Chapterhouse: Dune by Frank Herbert.

Facing annihilation from the fearsome Honored Matres, the Bene Gesserit Sisterhood struggles for ways to blunt their power. In the process, they learn about conditions in the Scattering, reexamine historic ways of looking at life and turn lush Chapterhouse into a new Dune able to support sandworms. A small group of malcontents lead by Sheeana and Duncan Idaho spirit worms off to a world that no one can trace. This promises to create interesting new patterns.

Facing annihilation by the Honored Matres, the Bene Gesserit Sisterhood hides on Chapterhouse and looks for solutions to problems. One is to prepare again for service, the great Bashar Miles Teg, who dies on Rakis/Dune, is reborn a ghola and is maturing. As more Bene Gesserit planets fall, more cells are sent into Scattering. Reverend Mother Lucilla is surrendered to the Grand Honored Matre, who plays cat-and-mouse with her before killing her. Sheeana, the desert waif from Dune, has become a Reverend Mother and is watching for worms to emerge. Murbella, the captive Honored Matre postulant, has bonded with Duncan Idaho and is nearing the Spice Agony. Odrade hunts to search for weaknesses to exploit in "Spider Queen," when a disgraced Reverend Mother arrives from Buzzell, and they concoct a means of drawing the Honored Matres into discussions. Odrade orders desertification accelerated and places wild Sheeana on the Council. Murbella gives birth, while Sheeana awakens Teg's memories, a coincidence that usefully keeps Idaho off-balance. Word comes that Spider Queen will accept Odrade's surrender on Junction, so Teg and Idaho prepare for war. Murbella undergoes a terrible Spice Agony, experiences a typical manic period and distances emotionally from Idaho. The Battle of Gammu is a feint to get the Honored Matres and their allies to flee to Junction, where the main battle is fought. Before the onslaught, Odrade seeks to understand Dama's psyche and motivations - which appear to be pure greed - and is shocked to see her murdered by her aide, Logno.

Murbella descends on Junction with an Honored Matre's hauteur and violence. She shares memories with her slain teacher, kills the killer and demands that both sisterhoods accept her sole leadership. Back on Junction, she lays out plans to gradually integrate the Honored Matres. Idaho and Sheeana take small worms and assorted passengers aboard the reactivated no-ship on a flight into the unknown. Sheeana may head a new religion. Odrade seems amused inside Murbella's busy head. An old farm couple, who Idaho sees a few times in the novel, appear at the end, having failed to capture the fleeing group and revealing they are free Face Dancers.