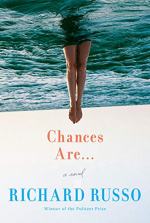 Chances Are . . . Summary & Study Guide includes comprehensive information and analysis to help you understand the book. This study guide contains the following sections:

This detailed literature summary also contains Quotes and a Free Quiz on Chances Are . . . by Richard Russo.

The following version of this book was used to create this study guide: Russo, Richard. Chances Are…. New York: Alfred A. Knopf, 2019.

The novel opens in 2015. Lincoln, Teddy, and Mickey are three friends who are currently in their mid-sixties. They arrive on the island of Martha’s Vineyard. They have been friends for decades but have not always kept in close touch. They originally met as undergraduates at Minerva College in the late 1960s. Lincoln was raised in a small town in Arizona by a domineering father. Lincoln attended Minerva College at the behest of his mother. In her will, Lincoln’s mother left him a house on Martha’s Vineyard. Lincoln has never lived in the house, but he rented it out to generate revenue. Teddy is originally from the Midwest, and his parents led secular lives. However, in his youth, Teddy became interested in religion and began attending church. Mickey was raised in a working-class family in West Haven, Connecticut. He attended Minerva after scoring a high SAT score. He is now a musician and an audio engineer.

In 1971, after graduating from college, Lincoln, Teddy, and Mickey vacationed at the house with their friend Jacy. They all had romantic feelings for Jacy, but she was engaged to another man. At the end of the vacation, Jacy mysteriously disappeared and was never seen again. Teddy was traumatized by the disappearance, and he became averse to romantic relationships. Teddy and Mickey are unmarried. Lincoln has been married for years and has several children and grandchildren.

After Lincoln, Teddy, and Mickey arrive on the island in 2015, Lincoln decides to attempt another investigation into Jacy’s disappearance. At first, he suspects that Jacy may have been killed by a misanthropic neighbor named Mason Troyer. In 1971, Mason sexually assaulted Jacy. However, Mason has a solid alibi. Eventually, Mickey tells Lincoln and Teddy the truth about Jacy’s disappearance. Lincoln and Teddy already know that Mickey fled to Canada in 1971 to escape the Vietnam War draft. However, they did not know that Jacy went with him in order to escape her impending wedding and her abusive family life.

A few years later, Jacy died of a degenerative brain disorder while she and Mickey were still living in Canada. In 1974, Mickey returned to the United States. After learning the truth of Jacy’s disappearance, Lincoln and Teddy feel a sense of closure. One of the reasons Lincoln came to the island was to try to sell the house there that he inherited from his mother. However, he decides that it would be betrayal of her memory if he sold it. Due to the sense of closure that Teddy feels from hearing the truth of Jacy’s disappearance, he feels a renewed sense of openness and excitement towards life in general.