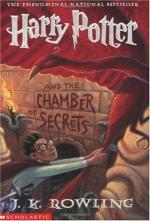 Harry Potter and the Chamber of Secrets Overview

J. K. Rowling
This Study Guide consists of approximately 68 pages of chapter summaries, quotes, character analysis, themes, and more - everything you need to sharpen your knowledge of Harry Potter and the Chamber of Secrets.

Harry Potter and the Chamber of Secrets Summary & Study Guide includes comprehensive information and analysis to help you understand the book. This study guide contains the following sections:

This detailed literature summary also contains Further Study and a Free Quiz on Harry Potter and the Chamber of Secrets by J. K. Rowling.

Heroic Harry Potter battles prejudice in the second volume of Rowling's wizard series. Returning to Hogwarts School of Witchcraft and Wizardry after another awful summer with his guardians, the Dursleys, twelve-year-old Harry yearns to play Quidditch, improve his magical skills, and enjoy his friendships. Such normal activities are soon overshadowed by sinister events. Prior to school beginning, a house elf named Dobby warned Harry not to go to Hogwarts and interfered with Harry's plans to do so.

At school, some students are targeted by malicious classmates and persecuted emotionally for not having pure wizard pedigrees. Several of these "mudbloods," as the students with non-wizard ancestors are called, are petrified by the idea of a monster that is rumored to live deep beneath the school in a secret chamber (reminding readers of the chambers Harry entered in Harry Potter and the Philosopher's/Sorcerer's Stone).

Only the heir of Hogwarts' founder Salazar Slytherin can open the secret chamber to release the malevolent creature held inside.

While trying to solve the mystery, Harry is accused of being the heir because he is a Parseltongue who can communicate with snakes as Slytherin was able to do a thousand years earlier.

Misunderstood and concerned about the well-being of his best friends Ron Weasley and Hermione Granger in addition to his classmates, including Ron's younger sister Ginny who is held hostage in the chamber, Harry perseveres to save Hogwarts from destruction despite unfair allegations about his motives and character. He confronts his archenemy Lord Voldemort while questioning his own character and ancestry.

Harry's self-confidence and faith in his allies bolster his magical abilities, allowing him to vanquish his foes in the form of the villainous Voldemort and his own confusing insecurities.

More summaries and resources for teaching or studying Harry Potter and the Chamber of Secrets.

Harry Potter and the Chamber of Secrets from BookRags. (c)2022 BookRags, Inc. All rights reserved.