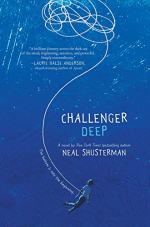 Neal Shusterman
This Study Guide consists of approximately 43 pages of chapter summaries, quotes, character analysis, themes, and more - everything you need to sharpen your knowledge of Challenger Deep.

“Challenger Deep” is a young adult novel by Neal Shusterman that follows 15-year-old Caden Bosch as he descends into mental illness, and recovers. Caden understands that there are two worlds – one that is real, and one that is real in his mind. Over the past several months, Caden has slowly lost his grip on reality, unable to focus on anything, constantly needing to walk, believing a kid at school wants to kill him, and being visited by a pirate Captain. The Captain forms the backbone of the illness for Caden, in which a pirate-like world is created wherein the Captain seeks to explore Challenger Deep, the deepest part of the Marianas Trench, the deepest area in the world. The Captain says there is no telling how deep it goes.

Caden agrees to go on this expedition, which signals his descent into illness. Caden feels outside himself, existing both in his mentally-constructed world, reality, and sometimes a blend of both. Caden’s parents commit him to Seaview Memorial Hospital for treatment while Caden continues to spiral. The Captain tells Caden that there is no telling how deep the Trench, or Caden’s illness, actually may go. The Captain of the expedition is accompanied by a security parrot, a mental mirror for Dr. Poirot. It is Dr. Poirot who comes to treat Caden at Seaview. All of the crewmembers onboard that Caden encounters are mirror images of the patients he meets at Seaview. There is the navigator, Hal, who obsessively seeks to find patterns in maps and who serves as Caden’s roommate at the hospital; there is the beautiful but distant Callie who appears on ship as the wooden maiden; and there is Carlyle, the group therapist who appears on the ship as the swabby.

As the weeks pass, Poirot and Carlyle work to get to the heart of whatever illness Caden has contracted through medication and through therapy. Piece by piece, Caden begins to emerge from his illness. In Caden’s mental reality, the better Caden gets in real life, the closer he and the Captain draw to the Marianas Trench. Tragedy strikes, however, when Hal attempts suicide by slitting his wrists. Carlyle is unfairly blamed for the incident, and fired. Callie, with whom Caden has grown close, is released from the hospital. So much change causes Caden to reel mentally, during which time he descends to the bottom of the Marianas Trench. There, he discovers candy treasure, and recalls a memory of a homeless man during a visit to New York. The homeless man wore a Cap’n Crunch cereal box on his head, and told Caden there is not telling how deep the subway goes. This is the root of Caden’s mental descent. Acknowledging this, Caden rises to the surface and breaks free.

Caden is declared sound of mind and released to his parents and sister to return home. Caden knows that he has been treated, but may not actually be cured. He settles back down into his life as much as he can, knowing he has lost a serious part of his fifteenth year that he can never have back. At the same time, Caden has more encounters with the Captain, but is strong enough to resist the Captain seeking to entice Caden to journey back into the deep. Caden understands that he might indeed venture into mental illness again one day, but for the time being, he knows he has the power to refuse.

More summaries and resources for teaching or studying Challenger Deep.