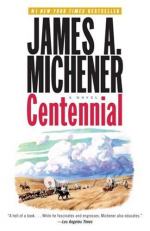 James A. Michener
This Study Guide consists of approximately 44 pages of chapter summaries, quotes, character analysis, themes, and more - everything you need to sharpen your knowledge of Centennial.

This detailed literature summary also contains Topics for Discussion and a Free Quiz on Centennial by James A. Michener.

The story begins with Dr. Lewis Vernor, a professor at a "small college in Georgia" being called on to verify facts of a story written by Carol Endermann. The story then shifts to extensive descriptions of the land, mostly along the South Platte River, and the Colorado town of Centennial, including how the mountain ranges and plains came into being. There are then descriptions of the earliest animals of the region.

Next comes the story of Lame Beaver, a member of the tribe known as "Our People" who will later be called Arapaho and Cheyenne. Lame Beaver encounters a pair of traders, Pasquinel and McKeag, and is impressed with Pasquinel. He tells his young daughter that she should consider marriage to the trapper. Lame Beaver, meanwhile, travels to a place called Blue Valley in search of tipi poles and kills an Indian, retrieving his gun and two bullets made of gold. Pasquinel becomes convinced Lame Beaver's daughter knows the location of this source of gold and marries her. More than a hundred years later, one of Lame Beaver's descendants, Paul Garrett, sees Blue Valley as an ugly place, exploited for its gold.

The descendants of Lame Beaver fight to find peace with the whites who constantly invade lands used by the Indians. The first cattle drive goes from Texas to Colorado, and English investors see the opportunity to establish a huge ranch called the Crown Vee, controlling millions of acres by controlling a few key water sources. The cattlemen fight the farmers who also want water and one, eventually known as Potato Brumbaugh, harnesses a great deal of the Platte for irrigation of huge sugar beet crops which prompts the building of a sugar beet factory. With that flourishing industry there's a need for farm workers and Mexicans arrive on the scene, finding the way difficult but less so than in their homeland. Next comes an innovative way to farm dry lands and the prairies are taken by families with the goal of growing wheat. In the 1920s, the farming practices prove fatal to the industry and dust storms carry away the top soil, leaving farming families destitute and cattlemen with no grazing land.

The story wraps up in the 1970s with Paul Garrett, a widower now in control of the Crown Vee. Garrett is concerned about the environment and fears that it may be too late to turn the country around. He finds himself in charge of the state's centennial celebration and is faced with bringing the myriad aspects of history to life.

More summaries and resources for teaching or studying Centennial.