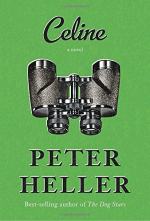 Related Topics
The Dog Stars
The Painter
The River: A Novel
The Guide: A Novel

Peter Heller
This Study Guide consists of approximately 37 pages of chapter summaries, quotes, character analysis, themes, and more - everything you need to sharpen your knowledge of Celine by Peter Heller.

The following version of this book was used to create this study guide: Heller, Peter. Celine. New York: Alfred A Knopf, 2017.

Celine Watkins is about 70 years old. She is a renowned private investigator who lives in New York City with her husband Pete. Celine was born in France, but her family fled to America in 1940 when the Nazis invaded France. One day, a woman named Gabriela Lamont contacts Celine and asks her to investigate the disappearance of Gabriela’s father, Paul Lamont. Paul was a renowned photographer for publications such as National Geographic. Paul disappeared about 20 years earlier near Yellowstone National Park and was presumed killed by a bear. Celine and Pete fly to Denver to meet with Celine’s son Hank, who loans them a truck, a camper, and a gun.

When Celine was 15, she became pregnant and gave birth to a daughter. Celine’s mother forced Celine to give the child away. Celine’s son Hank found out about this incident years later and decided to try to track down his long-lost half-sister, but he was unable to do so. As Celine and Pete drive towards Yellowstone, they discuss Paul Lamont, who apparently became extremely depressed following the death of his wife, Amana, who drowned accidentally when Gabriela was eight years old. Paul later married a woman named Danette Rogers, who was cruel and manipulative. She manipulated Paul into signing a prenuptial agreement that would give almost all of Paul’s wealth to Danette. Celine and Pete theorize that Paul likely faked his death so that the prenuptial agreement would be circumvented and his wealth would go to Gabriela.

After Celine and Pete realize that they are being tracked by a man, Celine manages to find out that the man is William Tanner, a former sniper for the Navy Seals. Celine and Pete theorize that some clandestine governmental agency is trying to stop their investigation. The narration exposits upon Celine’s childhood in America. She lived with her mother and two sisters in upstate New York. After coming to America, Celine’s father lived in New York City and rarely contacted his family. He eventually divorced Celine’s mother. The absence of Celine’s father caused much distress to Celine and her sisters. As Celine and Pete continue to drive towards Yellowstone, they continue their research into Paul’s past. They are intrigued by the work he did for National Geographic while on assignment in Chile in the 1970s, around the same time that a military coup in Chile (likely aided in secret by the U.S. government) overthrew Chile’s democratically elected government.

After arriving in Yellowstone, Celine and Pete speak with the local sheriff, who says that the assumption that Paul was killed by a bear is probably false. Celine and Pete soon deduce that Paul likely took a photograph in Chile that proves the U.S. government’s direct involvement in the Chilean coup. This deduction is confirmed after Celine talks to Gabriela on the phone and Gabriela finds the photograph hidden among Paul’s other photographs. Celine and Pete track Paul to a hidden cabin in Montana. When confronted by William Tanner, Celine says that the incriminating photograph will remain secret as long as Paul is unharmed. Tanner accepts this and retreats. Celine converses with Paul, who confirms that he faked his death in order to escape pressure form the government, as well as to circumvent Danette’s prenuptial agreement. Celine then tells Gabriela of Paul’s whereabouts so that Gabriela can visit Paul.

More summaries and resources for teaching or studying Celine by Peter Heller.