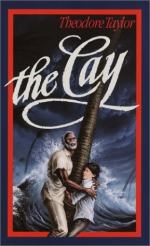 Several of Taylor's novels deal with the adventures of a young boy forced to grow up quickly in an unfamiliar setting; in addition to The Cay, these include The Children's War, The Maldonado Miracle, and a trilogy set in Hatteras, North Carolina (Teetoncey, Teetoncey and Ben O'Neal, and The Odyssey of Ben O'Neal).

Taylor's interest in combining high adventure with a background of historical fact can be seen not only in these novels but also in many of his nonfiction books such as Air Raid—Pearl Harbor!, Rebellion Town: Williamsburg 1776, Battle in the Arctic Seas: The Story of Convoy PQ17, The Battle of Midway Island, H.M.S. Hood vs. Bismarck: The Battleship Battle, and Battle in the English Channel.

Starring James Earl Jones as Timothy, The Cay was filmed for television and aired October 21, 1974.