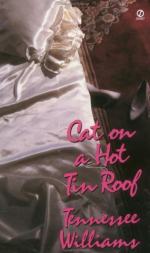 Tennessee Williams
This Study Guide consists of approximately 48 pages of chapter summaries, quotes, character analysis, themes, and more - everything you need to sharpen your knowledge of Cat on a Hot Tin Roof.

Symbolism is the use of objects to evoke concepts or ideas Williams has often been accused of excessive symbolism in many of his plays. Obvious symbols in Cat on a Hot Tin Roof are the cat, the moon, and Brick's crutch; equally prevalent are the diseases of alcoholism and cancer.

Alcoholism and cancer are linked in Cat on a Hot Tin Roof as two diseases representing problems in the spiritual well-being of their victims. Brick embraces alcohol as a way to keep his guilty feelings from surfacing. At the same time, the alcohol has slowly begun to make a slave of Brick, just as cancer is slowly taking over his father. Alcoholism is a self-imposed form of death-in-life when its victims drink in order to achieve a state of oblivion, as Brick does. It is a disease that will ultimately lead to death as cancer does.

More summaries and resources for teaching or studying Cat on a Hot Tin Roof.

Cat on a Hot Tin Roof from Gale. ©2005-2006 Thomson Gale, a part of the Thomson Corporation. All rights reserved.