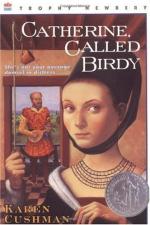 Karen Cushman
This Study Guide consists of approximately 21 pages of chapter summaries, quotes, character analysis, themes, and more - everything you need to sharpen your knowledge of Catherine, Called Birdy.

This detailed literature summary also contains Topics for Discussion and a Free Quiz on Catherine, Called Birdy by Karen Cushman.

Catherine, Called Birdy is the story of Catherine, the daughter of a moderately well-off baron in the years 1290 and 1291, when Catherine is thirteen and fourteen years old. The book takes the form of a journal Catherine is keeping to please her brother Edward, who is a monk and thus knowledgeable about the importance of reading and writing.

The story begins in September of 1290, when Catherine describes her world: her father's manor, her father and mother themselves (her father is bawdy, loud and disagreeable, her mother kind and sweet), and the different people she comes in contact with on a daily basis. One of the largest subplots of the book occurs when her favorite Uncle George comes home from the Crusades and falls in love with Catherine's friend Lady Aelis. However, because George does not have a high position in society, they cannot marry, and both end up marrying others (George, a crazy older woman named Ethelfritha, Aelis first to a seven-year-old duke and later to Catherine's brother Robert).

Catherine, Called Birdy discusses everything from the mundane events of her life (killing fleas, spinning and embroidery) to festivals and holidays (such as Easter or May Day, many of which are celebrated by the entire village) to her travels in England, which are limited (she goes, for example, to Lincoln with her father, or to spend a few day at Lady Aelis' manor).

The biggest thing to happen to Catherine throughout this year is her betrothal. Her father has decided that it is time for her to get married, and presents her with a string of suitors, each one more horrible than the next. No matter who comes to court her, Catherine finds something wrong with each man: one is too pompous, another too bawdy, and so forth. However, though she manages to scare many of them away, or to come up with ingenious plots to make her father scare them away, her father eventually betroths her to the worst of them all - Shaggy Beard, a middle-aged man who has been married before and who is absolutely disgusting.

Catherine spends the year fighting the marriage. She refuses to marry him, though she realizes that her father may be able to physically force her to; she comes up with many different plots to escape, and alternate versions of her life where she will run away and be a monk, or escape overseas and go on the Crusades.

As the day approaches for her official betrothal, she runs away to her Uncle George and Aunt Ethelfritha's home, thinking that she and her aunt can come up with some plan. Once there, though, she realizes that her aunt is completely crazy and that she herself will be the same no matter who she marries; thus, she allows her uncle to take her home. When she arrives home, though, she is confronted with the happy news that Shaggy Beard has died in a tavern brawl and she is now engaged to his son, Stephen, who is clean and young and educated. This match pleases her greatly, and she starts to dream about being married to him, counting down the days to when she can see him.