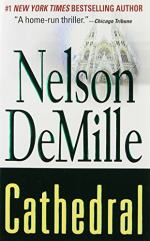 Nelson Demille
This Study Guide consists of approximately 50 pages of chapter summaries, quotes, character analysis, themes, and more - everything you need to sharpen your knowledge of Cathedral.

This detailed literature summary also contains Topics for Discussion and a Free Quiz on Cathedral by Nelson Demille.

The book opens with Sheila Malone, George Sullivan and Liam Coogan in a cottage with two British soldiers that they have been holding. Sheila has been ordered to kill them so they walk them out to the ravine and shoot them. Sheila could not bear to get close enough for a head shot so Liam had to deliver the final bullets. Afterward, Liam made his own way back to Belfast, while Sheila and George met the others in the car and drove to Belfast. On the way, she throws the pistol out the window.

The above sets the scene for this exciting novel by Nelson DeMille. On September 17, St. Patrick's Day, all of New York is getting ready for the big parade, and the Irish population and others celebrate the holiday well into the wee hours of the morning. This day is different. Police Intelligence Officer Patrick Burke expects trouble. Maureen Malone is in town and is supposed to take part in the festivities and will be in the reviewing stand at the Cathedral. She is on a Belfast IRA death list for deserting the organization. He also has word from his informers about a group called the Fenians, a radical break off group of the IRA.

As the festivities get under way, the Cathedral is taken along with four hostages: Maureen Malone, statesman Sir Harold Baxter, the Cardinal, and Father Murphy who was saying mass at the Cathedral. The group holding them is called the Fenians and their leader is Finn MacCumail whose real name is Brian Flynn. They have a well planned operation, from jamming the police communications to the list of names of people held under the British Special Powers Act that they want released by sunrise. They have the Cathedral rigged with bombs to explode at 6:03 am.

Against this backdrop, the police have to do what they can to rescue the hostages and save the Cathedral. None of the governments will give in to their demands and release the prisoners held in England and Ireland. Given this situation, there is a traitor in the police department who basically sells out the police attack force because his daughter is being held by the Fenians. There is a shady British Military Intelligence officer who is too involved in the whole plot from beginning to end. There is John Hickey, who staged his own death and funeral and is the one that wants to die in the Cathedral explosion. There are city and state officials that are more interested in public relations than they are in the danger to lives.

Cathedral by Nelson DeMille is a very exciting book that is hard to put down once the reader begins reading it. The reader will sit on the edge of seat from the time s/he begins the book until s/he reaches the final page. It is recommended reading for any lover of suspense novels.