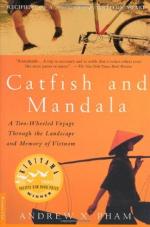 Catfish and Mandala: A Two-wheeled Voyage Through the Landscape and Memory of Vietnam Summary & Study Guide

Andrew X. Pham
This Study Guide consists of approximately 34 pages of chapter summaries, quotes, character analysis, themes, and more - everything you need to sharpen your knowledge of Catfish and Mandala.

Catfish and Mandala: A Two-wheeled Voyage Through the Landscape and Memory of Vietnam Summary & Study Guide Description

Catfish and Mandala: A Two-wheeled Voyage Through the Landscape and Memory of Vietnam Summary & Study Guide includes comprehensive information and analysis to help you understand the book. This study guide contains the following sections:

This detailed literature summary also contains Topics for Discussion and a Free Quiz on Catfish and Mandala: A Two-wheeled Voyage Through the Landscape and Memory of Vietnam by Andrew X. Pham.

Catfish and Mandala, by Andrew X. Pham, comingled a narrative of the author's solo bicycle tour of Vietnam with his memories of his birth and boyhood there, which ended when he immigrated to America with his family near the end of the Vietnam War. Its subtitle was appropriate: A Two-Wheeled Voyage through the Landscape and Memory of Vietnam. The book began with the author's encounter in Mexico with an American veteran of the Vietnam War who was separated from his wife and child and seemed emotionally lost. This set the stage for Andrew's many observations and ruminations concerning the relationship between America, his adoptive land, and Vietnam, his native land. Several American Vietnam veterans appeared in the story, as did many Vietnamese who participated in the war or were affected by it. Each such scene symbolized Andrew's own conflicted feelings about being caught between two cultures and feeling as though he did not fully belong to either one. Moreover, this entrapment between the two worlds made Andrew angry, bitter, confused, and sometimes sad, nostalgic, or wistful. All these feelings were experienced and explored by him during his journey through Vietnam as a young man to visit the people and places of his boyhood. The changes he encountered in both the villages and in extended family members were emblematic of the changes through which he had personally gone during his transformation from a Vietnamese boy to a Vietnamese-American man.

Through reminiscences and conversations, the dramatic stories of Andrew's family members before, during, and after the Vietnam War were delivered as counterpoints to his experiences with those people and others during his bicycle trip. One of the saddest aspects of the family life stories was that everything the Phams suffered—grinding poverty, imprisonment, terror, escape, uncertainty, and desperate longing—was not rewarded with happiness. Most of the family members achieved financial security and personal safety, but all seemed scarred by what they had endured. Even Andrew, who benefited from a good American education, felt that many other Americans either tolerated or actively loathed him because of his Asian blood, while the Vietnamese mostly thought of him as a rich escapee from his own country, a snobbish traitor to his origins. Much of the book was about this sense of displacement that Andrew felt. His bicycle trips, first in Mexico, and then up the coast of the United States, and finally through Vietnam, were outward reflections of an inward journey, which the author obviously hoped would help him to find some measure of peace.

Throughout the book, stories of Andrew's past and of his family kept breaking into the contemporary stories from his bicycle trip, showing not only that the journey was dredging up many memories, but also that Andrew was obsessed with his intense past, and with trying to work out what it meant to his present and future. What emerged from all this was the portrait of a sensitive young man burdened with bitterness and longing, a combination that made the reader hope that the author would someday be able to forge a more peaceful path through his life.

Catfish and Mandala: A Two-wheeled Voyage Through the Landscape and Memory of Vietnam from BookRags. (c)2022 BookRags, Inc. All rights reserved.