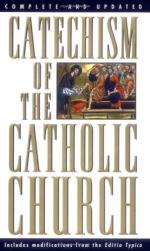 Roman Catholic Church
This Study Guide consists of approximately 49 pages of chapter summaries, quotes, character analysis, themes, and more - everything you need to sharpen your knowledge of Catechism of the Catholic Church.

Catechism of the Catholic Church Summary & Study Guide includes comprehensive information and analysis to help you understand the book. This study guide contains the following sections:

This is the first revision of the catechism of the Roman Catholic Church that has been produced and published in 400 years. This remarkable update is designed to serve bishops within the Church. It is expected that adjustments will be made for local customs.

The work was completed during the 1980s and came out in the 1990s. It was written in Latin and translated into numerous languages for dispersion throughout the Roman Catholic world.

The book is massive. This is because it aims to provide a complete overview of the Roman Catholic religion. This includes the beliefs espoused by the Church. There are also descriptions and explanations of the main rituals performed by the Catholic church.

By the end of it, every conscientious reader will have a clear overview of the religion and some understanding of how it operates. The focus is the beliefs and doctrines and rites of the Church rather than upon the political organization of it. For outsiders, or insiders, a little of this is explained as the book progresses.

Below, the summary has been divided to cover portions of the book. The way these divisions have been made is not identical to the layout of the Catechism. Readers should be aware of this. Mainly what is emphasized is that this summary is designed to be an extremely helpful supplement or precursor to the text and does not make a reasonable substitute for it.

Again, what follows are: Catholic beliefs, how the Church is and endeavors to be the perpetuation of the tradition begun by the apostles of Jesus, and the main ways that Christ's teachings are presented by the Catholic Church. For anyone wondering about how accessible this work is, the Church has made efforts for people to be able to obtain it. There have been at least 8 million copies printed, and it has been provided to the world in twenty living languages in addition to Latin versions for the continuance of longstanding traditions designed to preserve the text in the event of future changes in linguistic conventions throughout the world.

Lastly, readers should bear in mind that this is an update. It is designed to show where the tradition stands now. While the Church is famous for resisting change, the authors of this book even explain why this is. It is because their main mission is to preserve teachings and knowledge in their pure form, which obviously cannot be done if people go ahead and change things around all the time or without due consideration of any lasting or after effects of the behavior.

More summaries and resources for teaching or studying Catechism of the Catholic Church.

Catechism of the Catholic Church from BookRags. (c)2021 BookRags, Inc. All rights reserved.