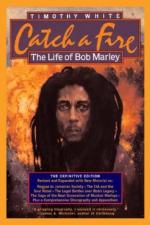 Timothy White
This Study Guide consists of approximately 27 pages of chapter summaries, quotes, character analysis, themes, and more - everything you need to sharpen your knowledge of Catch a Fire.

Catch a Fire: The Life of Bob Marley Summary & Study Guide includes comprehensive information and analysis to help you understand the book. This study guide contains the following sections:

This detailed literature summary also contains Topics for Discussion and a Free Quiz on Catch a Fire: The Life of Bob Marley by Timothy White.

The novel Catch a Fire is a complete biography depicting the events that happened to Bob Marley in his lifetime, as well as including the major events that influenced his behavior and thoughts. The beginning of the novel encapsulates the history of the Ethiopian people, specifically with Haile Selassie, who becomes the King of Ethiopia. The beginnings of Rastafarianism and why it started is fully explained. Since Rastafarianism played such a huge role in Bob Marley's life, it's important to know the history of this religion and how its origins would have appealed so strongly to Marley.

From there, the childhood and youth of Marley is explored. Marley is the child of a white American captain and Cedella Malcolm, typically called Ciddy. Captain Marley marries Cedella when he finds out that she is pregnant solely to make sure that his son will not be a bastard. However, shortly after Bob's birth, Captain Marley disappears. For this reason, Ciddy essentially raises Bob, who she prefers to call by his middle name "Nesta." He grew up in Nine Miles, Jamaica until his father called for him to come to Kingston to receive a better education. When Bob arrives in Kingston, however, his father immediately abandons him. When Ciddy comes to get him, she ultimately decides that she also wants to live in Kingston and works out a living arrangement with Toddy Livingston. Here, Bob gets his heavy influence in Jamaican culture and particular interest in reggae music.

Bob stays in Jamaica and eventually begins to record music and establish a group — Bob Marley and the Wailers. Working with Coxsone Dodd and other producers, he establishes his group as a success. Flying to England to record for Island Records, he meets Chris Blackwell who takes his music to another group of people — Europeans. As the popularity of his music increases, Bob and the Wailers become a fantastic success internationally. Throughout it all, Marley proclaims his personal feelings and messages about Rastafarianism and Jamaica in his music. He becomes a symbol for the Jamaican people and for poor people internationally with his songs that are intensely personal, but have incredible universal appeal as well.

Bob is sometimes brought into political arenas, which he tries to avoid and keep his music his only political message. However, at concerts like the "Smile Jamaica" concert, Marley is the centerpiece for Jamaican political figures and plays a role in trying to encourage peace and stability in Jamaica.

Bob is diagnosed with cancer at 33 and will die by the age of 36, a fact that he himself foresees and foretells to his friends. After he dies, he leaves behind 11 claimed children and his wife Rita and his mother Cedella, both of whom restart their music careers in his wake.

Catch a Fire: The Life of Bob Marley from BookRags. (c)2022 BookRags, Inc. All rights reserved.