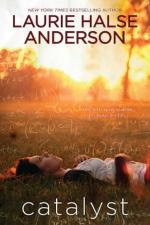 Laurie Halse Anderson
This Study Guide consists of approximately 18 pages of chapter summaries, quotes, character analysis, themes, and more - everything you need to sharpen your knowledge of Catalyst.

The novel Catalyst by Laurie Halse Anderson is a tale of teenage growth and coming of age. The protagonist and narrator of the novel, Kate Malone, is an eighteen year-old senior at Merryweather High School. She loves math, science, running track, and is fiercely loyal to her family. Her father, Jack, is a reverend; her brother, Toby, is fourteen. Kate cares for them, doing their laundry and making sure they take their medicine and eat well. Kate's mother has been dead for nine years, having died of sudden pneumonia.

Kate reveals to the reader that there are two sides to her: a good side (the Reverend's daughter, obedient, scholarly, athletic) and a bad side (where in her mind she is rebellious, and in person allows her boyfriend to put his hands all over her). Kate dreams of getting into MIT. Down the hill behind the Malone house and church lives Kate's mortal enemy, Teri Litch. Teri tortured Kate throughout elementary school, and has since been rude and abrasive to Kate.

A fire breaks out in the Litch family barn, destroying it, and damaging part of the Litch house. Mrs. Litch, Teri's mother, moves in with Betty, a member of the church, while Reverend Jack organizes a volunteer effort to rebuild the house. Teri, meanwhile, and her little brother Mikey will be staying with the Malones. To complicate things, Kate is rejected from MIT, and realizes she is in trouble because she has only applied to one college.

During the rebuilding of the Litch house, Mikey accidentally electrocutes and kills himself. It is then revealed that Mikey is actually Teri's son, not her brother. Teri resolves to destroy the interior of the house in rage and in depression. At the end of the book, Kate decides to take a year off before college and help Teri rebuild the house.

More summaries and resources for teaching or studying Catalyst.