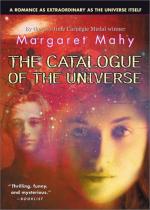 Overview
About the Author
Plot Summary
+Chapters Summary and Analysis
Chapter 1, Moonshine
Chapter 2, Threats of Invasion
Chapter 3, Family Matters
Chapter 4, The Wobble in the Cemetery of the World
Chapter 5, Encounters in a Changing Street
Chapter 6, On Being a Child of Love
Chapter 7, A Road of Blood and Flowers
Chapter 8, Events Are the Stuff of the World
Chapter 9, Foreign Relations
Chapter 10, Mrs. Potter Rolls a Cigarette
Chapter 11, Midnight Appointments
Chapter 12, A Step Up in the World
Chapter 13, A Leap into the Abyss
Chapter 14, The Dragon's Cave
Chapter 15, Three-Minute Hero
Chapter 16, The Catalogue of the Universe
Free Quiz
Characters
Objects/Places
Setting
Social Sensitivity
Literary Qualities
Themes
Themes/Characters
Style
Quotes
Topics for Discussion
Essay Topics
Ideas for Reports and Papers
Further Study
Copyright Information
Order our The Catalogue of the Universe Study Guide

The Catalogue of the Universe Topics for Discussion

Margaret Mahy
This Study Guide consists of approximately 76 pages of chapter summaries, quotes, character analysis, themes, and more - everything you need to sharpen your knowledge of The Catalogue of the Universe.

1. Why does Angela want to find out about her father? How is what she finds out at odds with what her mother has told her and with Angela's romantic notion about their relationship?

2. What is the nature of the relation ship between Angela and Tycho? Why do they become friends in the first place and how does their relationship change as the book progresses? Is this an example of how opposites attract?

3. When you see the car go over the cliff, do you assume with Angela that it is Dido? What leads us to expect this?

4. Why does Tycho leave Angela standing by the telephone booth after her meeting with her father?

5. The novel portrays two different families—Angela's and Tycho's. Describe each family and compare and contrast the two.

6. What role does science play in Tycho's life? How does he use science...

More summaries and resources for teaching or studying The Catalogue of the Universe.

The Catalogue of the Universe from BookRags. (c)2022 BookRags, Inc. All rights reserved.