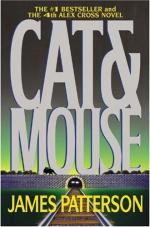 James Patterson
This Study Guide consists of approximately 40 pages of chapter summaries, quotes, character analysis, themes, and more - everything you need to sharpen your knowledge of Cat and Mouse.

This detailed literature summary also contains Topics for Discussion and a Free Quiz on Cat and Mouse by James Patterson.

Cat and Mouse is another novel by James Patterson, featuring his popular character of Alex Cross. In this novel, Gary Soneji, the criminal mastermind from Along Came a Spider returns. Soneji blames Cross for the time he has spent in jail for his crimes and wants to punish him. First, however, Soneji want to commit crimes he knows will make him famous long after he dies. While Cross tries to find Soneji and stop his crime spree, he finds himself pulled into another case, the case of Mr. Smith, a cruel and ruthless serial killer. Cat and Mouse is an exciting novel of mystery and crime that will please even new readers to the Cross series.

Alex Cross is called to Union Station where someone is shooting people sniper style. Before arriving, Cross gets a phone call from Gary Soneji. Soneji was a suspect in a previous case Cross worked. After his conviction, Soneji broke out of jail with the intention of killing Cross. Now Cross is not only concerned about what Soneji might do to innocent people, but also what he might do to him and his own family.

Cross investigates the shooting at Union Station where he and his partner, Sampson, find a rifle on a timing device. During the investigation, Cross learns that Soneji has stolen some blood Cross donated and spilled it at the crime scene. Before Cross can figure out what this means, Soneji attacks several commuters at Penn Station in New York City. Cross goes to New York City and meets the detective in charge. A few days later, this detective is found dead in his bed.

Cross goes to Lorton Prison to interview a cell mate of Soneji's, hoping to gain insight into Soneji's actions. This prisoner tells Cross that Soneji was infected with the AIDS virus while in prison. Soneji blames Cross for this infection. Now Cross understands why his blood was found at the crime scene and believes he knows why Soneji is in New York City. Cross believes Soneji is after the man who gave him the infection. Cross tracks the man down, but the man is killed in the process of arresting him. Cross arranges for the newspapers to falsely report that the man is still alive, however, hoping to bring Soneji out into the open.

Cross waits for Soneji in a hospital room hoping he will come to try to kill the man who gave him AIDS. Soneji appears, but he has a firebomb that he uses to get away. Cross manages to follow Soneji into the tunnels under the city. Soneji and Cross face each other in a dark tunnel and Soneji is killed. Cross and his family are relieved by Soneji's death and have a party that night to celebrate.

During this time, Cross has been following another case. This case is a serial murder case in which a man is killing people in America and throughout Europe. The FBI wants Cross to help track down this killer, named Mr. Smith in the press, but Cross continuously says he cannot. However, the night after Soneji is killed, Cross and his family are attacked in their home. The lead detective on the Mr. Smith case is brought in to help solve the case.

Through the course of this investigator, Thomas Pierce, attempting to catch the man who attacked Cross, Cross and the FBI come to the conclusion that Pierce is not who he appears to be. Pierce, the boyfriend of Mr. Smith's first victim, turns out to be Mr. Smith. Cross and Sampson gather evidence against Pierce while Pierce believes that Cross is on his death bed. When Pierce discovers the man behind the Cross attacks, he loses control over Mr. Smith and kills the suspect. Cross and Sampson attempt to arrest him, but Pierce escapes. Cross, Sampson, and the FBI follow Pierce throughout New England, finally ending up back where the crimes began. Pierce, who is filled with remorse over the murder of his girlfriend, has chosen Mr. Smith as his final victim. Pierce kills himself in the same bed where his girlfriend died.

More summaries and resources for teaching or studying Cat and Mouse.