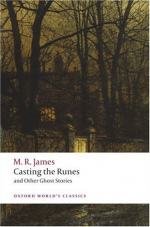 +Chapters Summary and Analysis
Canon Alberic's Scrapbook
The Mezzotint
Number 13
Count Magnus
Oh Whistle, and I'll come to You, My Lad
The Treasure of Abbot Thomas
A School Story and The Rose Garden
The Tractate Middoth
Casting the Runes
The Stalls of Barchester Cathedral
Mr. Humphreys and his Inheritance
The Diary of Mr. Poynter and An Episode of Cathedral History
The Uncommon Prayer-Book
A Neighbour's Landmark and A Warning to the Curious
Rats and The Experiment
The Malice of Inanimate Objects and A Vignette
Free Quiz
Characters
Objects/Places
Themes
Style
Quotes
Topics for Discussion
Order our Casting the Runes, and Other Ghost Stories Study Guide

Casting the Runes, and Other Ghost Stories Characters

Montague Rhodes James
This Study Guide consists of approximately 33 pages of chapter summaries, quotes, character analysis, themes, and more - everything you need to sharpen your knowledge of Casting the Runes, and Other Ghost Stories.

Casting the Runes, and Other Ghost Stories Summary & Study Guide includes comprehensive information and analysis to help you understand the book. This study guide contains the following sections:

This detailed literature summary also contains Topics for Discussion and a Free Quiz on Casting the Runes, and Other Ghost Stories by Montague Rhodes James.

In the short story, Canon Alberic's Scrapbook, Dennistoun, the Englishman visits the village of S. Bertrand de Comminges in 1883. He travels with his friends on a vacation but his friends are not as interested in history as he is. He decides to visit the church of S. Bertrand. During his visit, the verger of the church notices him but seems very scared. Dennistoun disregards this, as he does not believe in the supernatural. The verger shows him a book he may be interested in purchasing. The book is a scrapbook created by Canon Alberic. The verger is willing to sell it to him for a price much less that it is actually worth and Dennistoun takes this as a bargain. However, he learns why the verger was so eager to sell it when he also sees the vision of the demon. This story sets up the motif throughout the collection of the solitary man encountering the supernatural. He is the only character to appear in more than one story, as he is also mentioned in the story called The Mezzotint.

Mr. Garrettappears in The Tractate Middoth

Mr. Garrett is a librarian who helps John Eldred try to find a book, but realizes he should actually be helping a woman named Mary Simpson. He is a fully developed character in this collection of short stories. Garrett is willing to help John Eldred find the book he is seeking, but whenever he tries, he keeps seeing a mysterious parson. Eventually, he meets Mary Simpson, who tells him she was supposed to get an inheritance from her uncle but cannot find the will. Garrett realizes the will is hidden in the book that Eldred was looking for, and tries to get it before Eldred can. However, Eldred has already had the book sent to him. Garrett races to his house, trying to stop Eldred before he destroys it. However, the ghost of the parson comes and attacks Eldred, killing him. Garrett is able to restore the will to Mary Simpson, and ends up marrying Simpson's daughter. This short story is the most fully developed in the collection and ends with a happy ending for the main character.

Mr. Anderson is the narrator's cousin in the short story Number 13. He stays at a hotel in Denmark, and learns about the suspicion that causes hotels not to have a room numbered 13. However, his experiences with the room 13 that he discovers appears and disappears in the hotel make him a believer in the supernatural. He at first believes it is someone else who is staying in the room, but soon learns the room does not always exist.

The verger, also called the sacristan, is the caretaker of S. Bertrand's Church. He is visibly frightened of something when Dennistoun investigates the church. He eventually sells Dennistoun the scrapbook of Canon Alberic. He sees the demon that comes out of the book.

Mr. Kristensen is the landlord of a hotel in Denmark in the short story Number 13. He learns that the mysterious room numbered 13 seems to appear and disappear in his hotel.

Canon Alberic de Mauleon is the creator of the scrapbook that changes mysteriously.

Mr. Williamsappears in The Mezzotint

Mr. Williams works in a museum and acquires an unusual picture of a manor house. He learns that the picture changes and a mysterious figure appears to be proceeding across the lawn. He eventually learns that the events shown in the picture tie in with something that happened previously.

Mr. Nisbetappears in The Mezzotint

Mr. Nisbet is a friend of Mr. Williams who sees the changes in the mysterious picture. He tries to help Mr. Williams learn where the picture is from and why it is changing.

Mr. Wraxall is a travel writer who visits the tomb of Count Magnus. He finds himself drawn to the tomb but accidentally awakens the count. He is later killed by the count.

Parkinsappears in Oh Whistle, and I'll come to You, My Lad

Parkins is a professor of ontography at St. James College. He finds a mysterious whistle that causes him to be attacked when it is blown.

Sampsonappears in A School Story

Sampson is the headmaster of a boys' school. He seems to be haunted by a supernatural being.

Magnus De la Gardie is a count in Denmark who dabbles in the supernatural.

Mr. Filcherappears in The Mezzotint

Mr. Filcher is a servant of Mr. Williams. He sees the changes in the mysterious picture of the manor home.

Abbot Thomas is supposed to have hidden some treasure at the Abbey at Steinfeld.

Mr. Somertonappears in The Treasure of Abbot Thomas

Mr. Somerton is an antiquary who is interested in the treasure of Abbot Thomas.

Mr. and Mrs. Anstrutherappears in The Rose Garden

Mr. and Mrs. Anstruther are a couple in the story called The Rose Garden.

John Eldredappears in The Tractate Middoth

John Eldred is a man who comes into a library looking for a book. He is trying to destroy a will that would take away all that he has inherited.

Mr. Burtonappears in The Malice of Inanimate Objects.

Mr. Burton is a man who has terrible luck with inanimate objects. He is killed when his straight razor disobeys him while he is shaving.

Mary Simpsonappears in The Tractate Middoth

Mary Simpson is a widow. She is supposed to gain an inheritance even if she can only find the copy of a will that entitles her to it.

Karswellappears in Casting the Runes

Karswell is a man who studies witchcraft and uses it to get revenge. He kills James Harrington and attempts to kill Mr. Dunning.

Dunningappears in Casting the Runes

Dunning is a man who gets on the bad side of Karswell. He is able to turn the tables, saving himself and causing Karswell's death.

John Harringtonappears in Casting the Runes

John Harrington is a book reviewer who is killed by Karswell for giving him a bad review.

John Haynesappears in The Stalls of Barchester Cathedral

John Haynes is the former archdeacon of Barchester Cathedral. He is killed in revenge for murdering his predecessor.

Mr. Humphreys inherits an estate with a mysterious hedge garden.

Mr. Cooperappears in Mr. Humphreys and his Inheritance

Mr. Cooper is a friend of Mr. Humphreys. He shows him the estate he has inherited.

Mr. Wilsonappears in Mr. Humphreys and his Inheritance

Mr. Wilson is the uncle of Mr. Humphreys, who leaves him an estate that includes the hedge maze.

Lady Wardropappears in Mr. Humphreys and his Inheritance

Lady Wardrop is an expert on hedge mazes who comes to see the maze. She visits Mr. Humphreys estate, but finds herself unnerved by the maze.

James Dentonappears in The Diaries of Mr. Poynter

James Denton is a man who finds the diaries of William Poynter. He buys the books and allows his aunt to create curtains from a pattern found inside them.

William Poynterappears in The Diaries of Mr. Poynter

William Poynter is the author of a set of mysterious diaries.

Miss Dentonappears in The Diaries of Mr. Poynter

Miss Denton is the aunt of James Denton who likes the pattern she has found in the diaries of William Poynter.

Mr. Lakeappears in An Episode of Cathedral History

Mr. Lake is a researcher who visits the cathedral and learns its history.

Mr. Worbyappears in An Episode of Cathedral History

Mr. Worby is the caretaker and the verger of the cathedral. He outlines the story of the mysterious tomb that is found in the cathedral.

Mr. Davidsonappears in The Uncommon Prayer-book

Mr. Davidson unravels the mystery of the open prayer books. He determines that they have been stolen and is able to provide evidence leading to the thief.

Mrs. Porterappears in The Uncommon Prayer-Book

Mrs. Porter is a caretaker of the Brookstone estate. She cleans the chapel there and discovers the prayer books are somehow opened to the same page every time she comes in.

Mr. Poschwitzappears in The Uncommon Prayer-Book

Mr. Poschwitz is the man who steals the prayer books from Brookstone. He is later killed when a supernatural figure emerges from the books.

Lady Ivyappears in A Neighbour's Landmark

Lady Ivy is a woman who tried to steal land from her neighbors. Her spirit wanders the Bretton Wood, shrieking at those who pass through the area.

Paxtonappears in A Warning to the Curious

Paxton is a man who finds a mysterious crown that leads to his death. He tries to return the crown to the place he found it but is unsuccessful.

Mr. Thomson stays at an inn in Suffolk. He lets his curiously get the best of him and invades a room no one should enter.

Squire Francis Bowlesappears in The Experiment

Squire Francis Bowles comes back from the dead for revenge on his wife Mistress Bowles.

Mistress Bowlesappears in The Experiment

Mistress Bowles is punished for killing her husband, Squire Francis Bowles. She poisons him, but when he is brought back to life she must confess to escape him.

More summaries and resources for teaching or studying Casting the Runes, and Other Ghost Stories.

Casting the Runes, and Other Ghost Stories from BookRags. (c)2022 BookRags, Inc. All rights reserved.