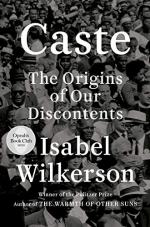 Related Topics
The Warmth of Other Suns

Important People in Caste: The Origins of Our Discontents

Isabel Wilkerson
This Study Guide consists of approximately 52 pages of chapter summaries, quotes, character analysis, themes, and more - everything you need to sharpen your knowledge of Caste.

Isabel Wilkerson is the author of the text, an award-winning Journalist and author. Wilkerson analyses America and its caste system, citing her own examples and lived experience as a black woman and thus member of America’s subordinate caste. Wilkerson began researching caste several years ago after starting to research deeply into racism in America, and realizing she was really interested in its caste system. Upon more research, she found that there was not much writing comparing America’s system to India and Germany’s, and began writing this book in order to bring caste into the mainstream and compare it with other famous caste systems.

Bhimrao Ambedkar is a Dalit activist, politician, and scholar who advocated for the plight of the Dalits, the lowest caste in India, in the early 20th century. Wilkerson describes the work he has done and notes that he...

More summaries and resources for teaching or studying Caste: The Origins of Our Discontents.

Caste: The Origins of Our Discontents from BookRags. (c)2022 BookRags, Inc. All rights reserved.