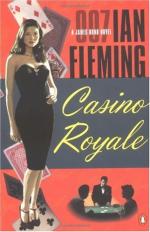 This detailed literature summary also contains Topics for Discussion and a Free Quiz on Casino Royale by Ian Fleming.

Casino Royale by Ian Fleming is a spy thriller set during the Cold War. It tells the story of one man, James Bond, and his evolution into a committed spy and secret agent. Bond accepts a mission to defeat a Russian agent, Le Chiffre, in a card game. He escapes death several times but eventually defeats Le Chiffre. This is just the beginning of Bond's journey. Other events lead to his renewed commitment to his job, which is a lifestyle more than a profession. The story is full of car chases, torture and sex as Bond's evolution into an international spy is revealed.

There are several story lines in the book. The main story is between James Bond, British secret agent 007, and Le Chiffre, an agent controlled by the Communist Russians. Le Chiffre has used Soviet money meant for a Communist controlled trade union to invest in brothels. This gets him into trouble when the French outlaw prostitution. The Soviet arch-spy agency SMERSH may be on his trail and if they catch him they will kill him. Le Chiffre's last resort is to remake the money through gambling. He goes to the Casino Royale in the north of France. Bond is an excellent gambler and his mission is to defeat Le Chiffre at the baccarat table and bankrupt him.

Bond checks into the hotel and prepares his operation. He has help from his partners including the beautiful Vesper Lynd, French agent Mathis and American CIA man Felix Lieter. Before Bond has a chance to face off with Le Chiffre, the Soviets make an attempt on his life. He survives a bomb blast unscathed. He makes it to the casino and confronts Le Chiffre. After tense drama, Bond manages to beat Le Chiffre in baccarat and bankrupts him.

After his win Bond takes Vesper out for a drink. She is lured into the parking lot and kidnapped by Le Chiffre. Bond pursues her and, after he crashes his car, is captured himself. Bond is tortured by Le Chiffre. Before he has a chance to break Bond, a SMERSH agent finds Le Chiffre and kills him. Bond and Vesper manage to escape but Bond is seriously injured. He spends three weeks in the hospital. While in the hospital Bond contemplates his future as a spy. When he is finally released, he starts a romantic relationship with Vesper. They take a vacation at a seaside inn.

They start a passionate relationship and Bond decides he will ask Vesper to marry him. Before he has the chance he catches Vesper making a secret phone call and acting duplicitously. Bond is frustrated and their relationship becomes strained. It comes to a head when Bond demands to know her secret. She promises to tell him the next day. They make passionate love and Bond retires to his own room. In the morning he finds Vesper, dead from a suicide. She was a double agent working for the Russians. This infuriates Bond and he recommits to his life as a spy.