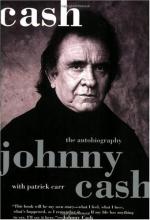 Johnny Cash
This Study Guide consists of approximately 28 pages of chapter summaries, quotes, character analysis, themes, and more - everything you need to sharpen your knowledge of Cash.

This detailed literature summary also contains Topics for Discussion and a Free Quiz on Cash: The Autobiography by Johnny Cash.

Johnny Cash was born in Dyess, Arkansas. Born as the Great Depression is winding down, Johnny recalls his father doing whatever he could to make a living - including chasing any rumor of a job by hopping a freight train. He moved to Kingsland with his parents when he was very young to a communal farming project put in place by the government. The family includes Johnny's older brother, Jack, to whom Johnny is devoted. One particular day, Jack seems to feel a reluctance to go to his job operating a saw, but citing the family's need for the money, goes anyway. Johnny's father comes to get him later that day, saying that Jack had been injured. Jack dies a few days later and his death greatly impacts the family. Johnny says that it's a statement of the unforgiving situation that means his mother - still grieving for her son - is back in the cotton fields the day after Jack's funeral.

Johnny's mother always says that he has a gift and encourages his music though his father believes it to be a waste of time. Johnny goes to Germany for a stint in the military and returns with plans to marry a woman he'd written to over the years away from the states. They marry and have four children, though the marriage is soon in trouble, at least partly because his wife has seen the attitudes of the women who follow the stars and partly because Johnny is on a downward spiral of drug use. Johnny is enamored with June Carter and they eventually marry. There is one son born of that marriage, John Carter Cash.

Johnny tells the stories of excitement on the road. He worked with many other up-and-coming young music people including Elvis, Jerry Lee and Carl Perkins. The demands of the road are Johnny's first excuses for using drugs and the downward spiral of abuse is soon a major part of his life. When he is confronted by his entire family, he agrees to go for treatment at the Betty Ford Clinic but says that the recovery is extended and that he returns to use this and other facilities over the coming years.

By the 1990s, Johnny could retire but says he doesn't want to. He continues to travel, makes another album that focuses solely on his voice and his own acoustic guitar, and finds time for family and friends. He talks at length about the people, including those who die. Luther Perkins, a member of Johnny's original band, was one of those and Johnny cites the tragic loss of Roy Orbison's wife and then later his two children. There are several near-misses in his own life, including health problems and accidents. As he brings his thoughts to a close, Johnny says that he hopes he doesn't disappoint the fans though they are sure to notice that he has aged. Johnny says that his hope - and that of all performers, is that he will die on stage, in the midst of a favorite song and surrounded by family and members of the band while the drummer, Fluke, continues to lay down a rhythm.

More summaries and resources for teaching or studying Cash: The Autobiography.