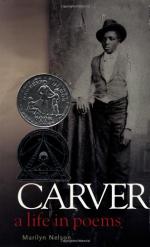 +Chapters Summary and Analysis
Out of Slave's Ransom to Washboard Wizard
Old Settlers' Reunion to Cafeteria Food
Curve-Breaker to Called
My People to Coincidence
Beside Reading to The Sweet-Hearts
A Patriarch's Blessing to The Year of the Sky-Smear
The New Rooster to Ruellia Noctiflora
Professor Carver's Bible Class to Friends in the Klan
My Dear Spiritual Boy to The Penol Cures
Letter to Mrs. Hardwick to Moton Field
Free Quiz
Characters
Objects/Places
Themes
Style
Quotes
Topics for Discussion
Order our Carver: A Life in Poems Study Guide

Carver: A Life in Poems Characters

Marilyn Nelson
This Study Guide consists of approximately 27 pages of chapter summaries, quotes, character analysis, themes, and more - everything you need to sharpen your knowledge of Carver.

Carver: A Life in Poems Summary & Study Guide includes comprehensive information and analysis to help you understand the book. This study guide contains the following sections:

This detailed literature summary also contains Topics for Discussion and a Free Quiz on Carver: A Life in Poems by Marilyn Nelson.

George Washington Carverappears in Carver: A Life in Poems

George Washington Carver is born a slave in Missouri circa 1864. He and his mother, Mary, a black slave, are stolen. Mary goes missing, but George is found and is returned to Mary's white owners, Moses and Susan Carver. They happily raise George. George is an intelligent black child. He loves to roam in the garden and pick bouquets. He loves nature and makes brilliant observations about nature at a young age. He goes on a quest for education, even though he faces extreme racism. George overcomes racism through his talents. He is a multi-talented person. He paints, sews and is a botanist. He is brilliant in everything he does, especially academically. His ultimate love is nature.

George receives a Master's degree from a white college, unheard of in those days. He seems to fit in better with the white community at times. Whites appreciate his poise and talent, but blacks think he is uppity and a snob. George begins to examine his blackness at Tuskegee Institute when he is around other blacks. George is a thinker and a doer. He creates inventions and is a famous scientist. But he is also spiritual and takes a spiritual journey of his own in which he finds white friends. Right before his death, George believes his spirit will continue to live on. Above all, nature recycles everything and he will be reincarnated in nature.

Susan (Sue) Carverappears in Prayer of the Ivory-Handled Knife

Susan or Sue Carver is George Washington Carver's foster mother. When George and his slave mother Mary are stolen, George is the only one found. Sue and her husband Moses raise George. She loves George dearly and when he is found, she cries with happiness. Sue believes that God sends her George (and his brother) because she and Moses are childless. But she struggles as a mother with raising two black children in a racist society. Sue's downfall is she realizes these children will always be hated and there is nothing she can do about that. Sue wishes to protect George and his brother from hatred.

Sue is a loving, caring person. She does not care about George's race. She loves unconditionally. She sees the goodness in George. She is also the first to recognize George's intelligence and talent. She sees that George loves nature and flowers and he understands the natural world. She calls him her little "plant-doctor." Sue looks to George for happiness and fulfillment. Raising two black children fulfill her and Moses. As George grows older, she fully supports his dream of education and lets him go to find that dream. Without the support of Sue Carver, George Washington Carver could not have achieved as much as he did. Thus, Sue is an important figure in Carver's life.

Jim Washington Carverappears in The Last Rose of Summer

Jim Washington Carver is George's older brother. He is also raised by the Carvers and he dies of smallpox. When he dies, George has an epiphany that he should be an agriculturist.

Black Colleagueappears in My People and Odalisque

A black colleague at Tuskegee Institute writes how he is angry because Carver gets preferential treatment because he graduated from a white college with a Master's degree. Carver receives more perks than the other black faculty and it angers this colleague.

Sarah Huntappears in The Sweet-Hearts

Sarah Hunt is an ex-girlfriend of Carver's. Before she commits suicide, she has fond memories of Carver courting her. Carver brings her flowers and teaches her fourth graders about gardening, but he just stops coming around one day.

George R. Bridgeforth is Carver's nemesis. He is hired at Tuskegee and he is brilliant too. He and Carver fight over their poultry duties and eventually Booker T. Washington awards Bridgeforth the Poultry Yard, which he takes away from Carver.

Booker T. Washingtonappears in Veil-Raisers and How a Dream Dies

Booker T. Washington is the founder of Tuskegee Institute. Washington is a workaholic and Carver's boss and mentor. Everyone is scared of him. When Washington dies, Carver is depressed.

Uncle Moses is George Washing Carver's foster father. He loves George and sees him as great. Moses is a disciplinarian. He dies in 1910.

Jim Hardwick is a white student who is the first of Carver's Boys. Carver is a mentor and friend to Hardwick. Hardwick's friendship is important to Carver because it restores his faith in white people.

Austin Curtis is nicknamed Baby Carver because Carver thinks of him like a son, not just as an assistant. After a long line of failed assistants, Curtis impresses Carver and they work together for a long time.

More summaries and resources for teaching or studying Carver: A Life in Poems.

Carver: A Life in Poems from BookRags. (c)2022 BookRags, Inc. All rights reserved.