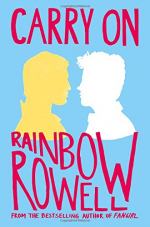 Carry On Summary & Study Guide includes comprehensive information and analysis to help you understand the book. This study guide contains the following sections:

This detailed literature summary also contains Quotes and a Free Quiz on Carry On by Rainbow Rowell.

Carry On, by Rainbow Rowell, is a fantasy novel which transports young adult readers to the world of magic. In the story, the Chosen One (Simon Snow) must defeat the evil Humdrum, who seeks to destroy the magical world in the United Kingdom. When the novel begins, the orphaned Simon is just starting his eighth and final year at Watford School of Magicks. The Mage, who is the head of the school and the leader of the magical world, is mentoring Simon. As the Chosen One, Simon enjoys something of a celebrity status. Some people hate and fear him. Others love him. Simon’s girlfriend, Agatha, breaks up with him because of expectations placed on her to be by Simon’s side at all times. The breakup devastates Simon. He takes comfort in his best friend Penelope, who is beautiful and intelligent, and in the school goat herder, Ebb. Ebb is warm and friendly.

Simon also worries about the absence of his roommate, Baz, during the first few weeks of the school year. Though roommates, Simon and Baz are staunch enemies. Simon receives a message from a female ghost, urging him to find Nicodemus to find the ghost's killer. Simon believes the ghost is meant for Baz, but Baz is not at school.

Initially, Simon believes that Baz is siding with the magical Old Families against the Mage, because the Families have fallen out of power and influence with the Mage’s reforms. They would rather bring the Mage down than save the magical United Kingdom. As it turns out, Baz was late to school because he was kidnapped by troll-like numpties. Baz admits early on that he hates Simon.

Upon learning about the ghost, Baz is deeply troubled, for his mother was killed by hired vampires many years before when she was head of the school. Simon offers Baz help to find his mother’s killer, and Baz accepts. Together, with Penelope and Agatha, the four commit to solving the murder of Baz’s mother and to finding a way to stop the Humdrum. Simon also comes to realize he has feelings for Baz, and the two fall in love.

As winter approaches, the four friends are able to determine a number of important things, including that the Old Families have been right to oppose the Mage. First, they learn from Nicodemus, who is the brother of Ebb, that he was approached by the Mage to strike a deal to sneak vampires into the school to stage an attack to signal the need for reforms and the coming to power of the Mage. Nicodemus explains he refused because he did not want his sister to be hurt. The Mage managed to get vampires in the school. The vampires killed Baz’s mother and turned Baz into a vampire. The ghost visiting Simon was not Baz’s mother. Instead, it was Simon’s own mother, who conceived Simon with the Mage in the attempt to force a prophecy and bring about the Chosen One.

Simon is sort of the Humdrum. Simon is a Normal child conceived with forced magical abilities. He uses a tremendous amount of magic each time he practices, causing great holes in the magical world to open up, and causing a shadow of himself to form as the Humdrum. Only by feeding his magic into the Humdrum does Simon manage to defeat the Humdrum, and kill the Mage. Simon, however, has lost all of his magical abilities, and he must now live as a Normal. He is happy to at least have Baz and Penelope in his life. Agatha, meanwhile, leaves for California to leave the world of magic behind for good.

Carry On from BookRags. (c)2022 BookRags, Inc. All rights reserved.