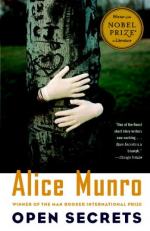 Carstairs is a small town in Alberta, Canada. Louisa originally arrives in Carstairs as a traveling saleswoman, and she takes up residence there after applying for the recently vacated position of town librarian. Carstairs is also the place of residence for Jack Agnew and Arthur Doud. The town’s main source of employment and industry is the Doud family’s factory.

Carstairs has one public library. Its construction was originally funded by Arthur Doud’s father. The previous librarian was Mary Tamblyn, but after she died, Louisa was hired to replace her. Jack Agnew originally knows Louisa from the context of the library. Arthur Doud returns Jack’s library books after Jack’s death, and Arthur subsequently forms a relationship with Louisa that eventually leads to their marriage.

The Doud family’s factory is the main source of industry in Carstairs. At the beginning of the...