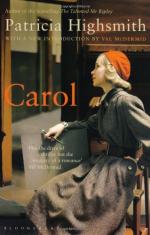 This detailed literature summary also contains Quotes and a Free Quiz on Carol by Patricia Highsmith.

NOTE: This guide refers to the Kindle edition of Carol, by Patricia Highsmith.

At the beginning of the novel Carol, by Patricia Highsmith, 19 year old Therese is in the cafeteria of the high-end department store she is working at during the Christmas season. She finds the place depressing. Her outlook on life changes one day when a beautiful blond woman, Carol, comes to her department to buy a doll for her daughter. Therese is physically attracted to the woman and sends her a Christmas card. Carol responds, and the two women meet for coffee. After the initial meeting, the two women continue to meet each other with Carol often taking Therese to her house. Therese is in love with Carol, but she cannot tell how Carol feels about her.

While the meetings between the two women continue, Therese's career as a set designer advances due to the networking efforts of her boyfriend, Richard. However neither this nor his family's acceptance of her is enough to change her feelings for him. He says that he loves her, but she does not love him. To make matters worse, her thoughts now are only on Carol, who is in the midst of a divorce and custody battle with her estranged husband, Harge.

Needing a break, Carol decides to go on a road trip and invites Therese to come with her. Therese agrees. Before she leaves, Richard (who knows about her feelings for Carol but thinks that it is a phase) sends her a telegram reminding her that he loves her. Richard's mother sends her a white dress that looks like a wedding dress.

The two women proceed on their trip. As the journey progresses, the two women proclaim their love for each other and kiss and cuddle in private. Things change, however, when Carol receives word from her friend Abby, whom she had an affair with in the past. Abby tells Carol that her estranged husband has hired a private detective to follow her. Carol realizes that their room might have been bugged. Therese thinks that it is possible that she saw the private detective. They discuss whether to go back to New York or not. They decide to stay. Carol tries to lose the detective, but she fails. She finally confronts him and buys the tapes that he has with him. He warns her that he has already sent other tapes to New York. On top of that, Harge has possession of a love letter that Therese wrote but never gave to Carol. Therese left it in a book that she left at Carol's house. Florence, the maid, found it and sold it to Harge.

Carol finally decides to go back to New York, but she tells Therese that she can stay and keep the car. She will join her later. Therese matures during her time in the West. She also talks to Carol a bit and finds out that Harge is making her promise that she will not see Therese again in exchange for seeing Rindy.

During this period of time, Dannie, a friend from New York, stops by to see her on his way to California. Therese tells him about Carol and says that she will probably not see other women. Nevertheless, she does not join him either. Instead, she returns to New York and contacts Carol so that she can pick up the car. During their conversation, Carol reveals that she did not give in to Harge's demands in the end because he would have turned Rindy against her anyway. They have agreed to sell the house. She now lives in an apartment in the city. Carol asks her if she would like to live with her, but Therese declines the offer. After meeting a woman who reminds her of Carol at a party,Therese realizes that Carol is the only woman she loves, and she goes to her. Carol is happy that she is there.