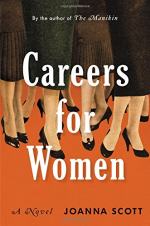 Albany, New York is the place where Robert Whittaker Jr. works at while still located at the Alumacore Headquarters. This is during a time when he was price fixing the price of aluminum and having his affair with Pauline Moreau where she became pregnant. Both Mr. Whittaker and Pauline leave this place in pursuit of something else in hopes to make their lives better.

Visby, New York is the small, rural town in upstate New York where Robert Whittaker Jr, his wife Kay, and their young son, Robbie, move to after Robert is transferred to aluminum plant there as supervising manager. It is in this small town that Robbie and Brigid fall in love. It is here that many farmers, Mohawk tribe members, animals, and water is contaminated due to the plant’s harmful effects on the environment. This is where the Visby...