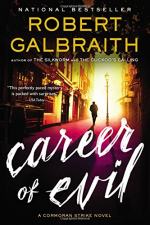 Cormoran Strike is one of the main characters in the narrative. He is a war veteran who used to work for the Special Investigation Branch and now owns his own private investigation agency. Robin is his assistant/partner. Whittaker is his step-father. Shanker is an old friend whose Strike's mother took in when he was young.

Like the character of Sherlock Holmes, Strike is intelligent and has excellent powers of observation and deduction. He is arrogant in that he likes to show these skills at the expense of others and thus does not have many allies in the police force. In addition, like the fictional character of Sherlock Holmes, he is cold and distant in his personal relationships with everyone with the exception of Robin who represents Dr. Watson in their relationship.

Strike has the qualities of a hero. He is courageous as shown by the fact...