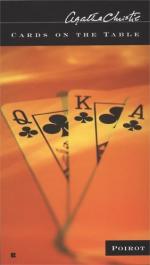 Cards on the Table Topics for Discussion

Agatha Christie
This Study Guide consists of approximately 42 pages of chapter summaries, quotes, character analysis, themes, and more - everything you need to sharpen your knowledge of Cards on the Table.

Is Mr. Shaitana's dinner party an ill-advised attempt to study the mind of a murderer? Discuss Shaitana's motivation for the party.

Do you believe Poirot could have prevented the murder? Why or why not?

Why did Mrs. Lorrimer protect Miss Meredith? Explain with details from the text.

What specifically did Poirot do to evaluate Miss Meredith's character? Why was this important?

Discuss the detecting techniques of the four sleuths; cover how they each approach the murder and whether their intuitions were correct. Who actually solves the crime?

List the four suspects and detail the murders of their past that Shaitana knew about. Were they all true murders...

More summaries and resources for teaching or studying Cards on the Table.

Cards on the Table from BookRags. (c)2022 BookRags, Inc. All rights reserved.