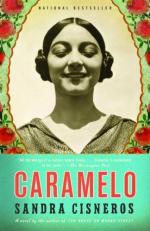 Sandra Cisneros
This Study Guide consists of approximately 40 pages of chapter summaries, quotes, character analysis, themes, and more - everything you need to sharpen your knowledge of Caramelo, or, Puro Cuento.

This detailed literature summary also contains Topics for Discussion and a Free Quiz on Caramelo, or, Puro Cuento by Sandra Cisneros.

Caramelo is the story of Celaya's life and family and the different stories that made her life the way it was. A story in her family can be completely false, true, or something in between. The point is that it doesn't matter whether the story is true or not, rather it matters what it adds to the family. If a story adds honor to the family, it is tossed around from person to person, ear to ear, even if it is false. If a true story that would only harm the family's name surfaces, the family does all it can to limit its audience, blaming others that weren't even involved and trying to keep it under raps. The humor in all of this is that most of the family members know the truth behind every fabricated story, yet they spread the fake one as well solely for the excitement of having a great story to tell. The Mexican culture is all about putting your best foot forward, and this book is about showing not only the foot, but the motivation behind the first step.

Celaya uses different times in her life to show these steps, using her memory and the memories of her grandmother, against whom she has a hearty grudge. Throughout the book, the grudge is analyze,d and Celaya finds that her grandmother does not hate her, rather she is jealous of her because her son, Inocencio, now has another female in his life that he loves more than his mother (his wife was never even in the competition). Thus the story unfolds about the struggles between the women in the family and their attempts to baby their men to keep them away from other women. The men do what they can to support their wives and mothers and enjoy the pettiness that unfolds simply to gain their attention.

As the story evolves, relationships become more complex, yet easier to understand because the different links are explained. We understand the love of mother and son, the bond between wife and husband, and even the resentment that exists in that same union. The reader realizes how hard it is for a weak and sentimental person to grow up in such a rough and tumble family and wants Celaya to have her own life, to be free from the madness. In the end, this is a tale of mothers and sons, and mothers and daughters and their interactions with other mothers in the complexity of large Mexican families. Thrown into the mix is the issue of class and race, which adds delightfully and sometimes disgustingly, to the drama. The moral of the story, however, is that despite how crazy family can be, how annoying, loud and intrusive, they will always be there, and it is better to glorify and respect those that truly love us by spreading positive stories and praise, than by demoralizing them and turning our back on them by telling the truth.

More summaries and resources for teaching or studying Caramelo, or, Puro Cuento.