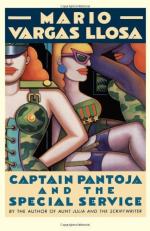 This detailed literature summary also contains Topics for Discussion and a Free Quiz on Captain Pantoja and the Special Service by Mario Vargas Llosa.

Captain Pantoja and the Special Service by Mario Vargas Llosa takes place over a span of three years, 1955 to 1958. The main protagonist Pantaleón Pantoja, has just been promoted to Captain in the Peruvian Army. A career administrative soldier, Pantoja enjoys a reputation as a straight arrow and an upstanding member of his country's armed forces. On the day of his promotion, Captain Pantoja meets with several high-ranking officers to receive the details of his next assignment. Pantoja is thrilled at the thought that the generals wish to personally give him his new orders and Pantoja is nearly beside himself with anticipation.

Pantoja, his wife Pocha and his loving mother, Leonor, will be moving to Iquitos in the Amazon jungle region of Peru. Captain Pantoja, puffed up with the praise lavished on him by his superiors, has been given a rather challenging task and instructed to maintain the highest degree of secrecy in carrying out his duties. In short, Captain Pantoja is entrusted with the responsibility of researching and implementing a prostitution service dedicated solely to meeting the physical needs of Peruvian Army personnel stationed on remote installations in the Peruvian Amazon. Initially, Pantoja is somewhat ambivalent about his new assignment. However, because he is a model soldier and intensely proud to wear the uniform of the Peruvian armed forces, he throws himself into his work with great enthusiasm and spectacular efficiency. As a result of the delicate nature of his assignment, Pantoja must work undercover. His wife and mother must never find out what the Army has instructed him to do. As part of establishing the Special Service (the name of the Army's prostitution ring), Pantoja forms close working relationships with pimps, prostitutes and hustlers in the Iquitos area. These characters eventually become Pantoja's surrogate family.

While Pantoja busies himself with the Special Service, another matter is coming to the fore in the Amazon region. A rogue monk named Brother Francisco has been gathering followers from all over the region. Francisco preaches that crucifixion is the way to salvation and his devotees are known to make sacrifices of small animals as well as insects. However, concern over Francisco's sect (known as the Brothers of the Ark) reaches the level of widespread panic when a young boy is crucified in the town of Moronacocha. "The Boy Martyr" as he is known, is worshiped and prayed to by those who follow Brother Francisco. When an old woman is crucified, the Peruvian government instructs the Army to capture Brother Francisco.

The Special Service becomes increasingly popular among all branches of the Peruvian military and soon Pantoja has his hands full. However, when he hires a prostitute known as the Brazilian and stories of the Army's Special Service begin to spread throughout the region, Captain Pantoja's professional and personal lives start to crumble and trouble begins.