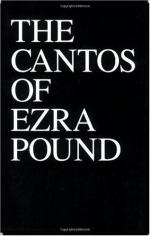 Additional Resources for The Cantos by Ezra Pound

Carpenter's biography is the most extensive and detailed of the many books that tell the story of Pound's life.

Casillo confronts Pound's ugliest side: his fascist and anti-Semitic ideas.

Many consider this to be the definitive book not only on the Cantos but on Pound's contribution to twentieth- century literature and culture.

Rainey, Lawrence, Ezra Pound and the Monument of Culture, University of Chicago Press, 1991.

Rainey's book examines in close detail the historical and artistic sources behind the "Malatesta cantos" (8-11).

Terrell, Carroll F., A Companion to 'The Cantos' of Ezra Pound, University of California Press, 1980.