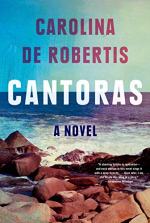 Carolina De Robertis
This Study Guide consists of approximately 40 pages of chapter summaries, quotes, character analysis, themes, and more - everything you need to sharpen your knowledge of Cantoras.

The following version of this novel was used to create this study guide: De Robertis, Carolina. Cantoras. Knopf, 2019.

In 1977, a group of five young homosexual women from the Uruguayan metropolis of Montevideo travel all day bus to the distant rural fishing village called Cabo Polonio. The group consists of the leader Flaca, the political activist Romina, the dissatisfied housewife Anita (later nicknamed “La Venus” because of her striking appearance), the awed teenager Paz, and the deeply mysterious and reserved Malena. The group spends seven days at the beach, which feels like a necessary and revelatory emotional retreat compared to their lives in the city, which is under a military dictatorship, and forbids things like private gatherings, nighttime walks, or homosexuality. Although not every member of the group had known each other previously, the trip emotionally bonds the group of five women together.

Paz develops a friendship with the owner of the village’s one grocery store, a kind man named El Lobo, and learns that there is a hut in the village that is for sale. As the group returns to Montevideo and feels depressed about resuming their normal lives, the group eventually regathers to discuss purchasing the hut. The group realizes that they cannot afford the hut even after pooling their money together. However, Malena reports that she will account for the gap, and mysteriously provides the remainder of the needed money. The group buys the hut in January of 1979. However, on their celebratory return trip, they learn that the military is now taking over the local lighthouse, meaning that the effects of the dictatorship have now spread to Polonio.

When the group is back at the hut, which they have nicknamed “La Proa” (“The Prow”), Paz is sitting outside when an old woman in a fur coat tells her to sit more lady-like. Paz talks back to her. Later in the night, when the group is eating together, soldiers tear into the house and take Paz with them. Paz is held in the rural jail for four days before eventually being bussed back to Montevideo, where her mother is summoned to the police station, triggering a huge argument between mother and daughter.

Anita begins a passionate romance with a famous singer, Ariella Ocampo, although spending so much time in Ariella’s rich neighborhood begins to make her feel isolated from the group. Romina and Malena begin a relationship together, but, despite their shared seriousness, Malena will still not reveal very much about her past. As the years go by, La Proa becomes a homely atmosphere, after it had dirt floors when they first arrived. Anita follows Ariella to Rio de Janeiro, Brazil, when Ariella receives an artist’s fellowship. However, their relationship grows tense there, and Anita eventually leaves when tensions arise over the care of Ariella’s young son, Mario, whom Anita was effectively mothering. On New Year’s Eve, 1982, Anita returns with the group to La Proa and effectively reunites with the group.

In November 1984, the country of Uruguay effectively votes to end the dictatorship. Flaca quietly celebrates the momentous news with her father, grieving the loss of her mother. Paz has earned money illegally selling seal skins to the city with El Lobo, and has earned enough to buy her parents’ house at a discount. She plans to convert the basement of the house into a gay-friendly bar. In March 1985, the new president of Uruguay is sworn in, and Romina’s long-imprisoned brother, Felipe, is freed. After the initial celebration as Felipe reunites with family, it is unclear how he should proceed with his life. In February of 1986, Paz opens the bar, called “La Piedrita” (“Little Stone”). The group goes to an exhibition of paintings by a Paraguayan painter named Diana Cañeza, and Romina quickly falls in love with her, abruptly ending her relationship with Malena, to Malena’s displeasure.

Malena then suddenly disappears from the group, with no one knowing her whereabouts. Malena travels to the small town of Trienta y Tres, where she looks to reunite with her former neighbor, Belén, whom she had kissed as a 14-year-old. As she travels, Malena recalls how she had been discovered by her parents kissing Belén, and was then sent by her parents to a harsh clinic in Buenos Aires, Argentina. Malena was effectively tortured at the clinic by Dr. Vaernet, who had literally been a former Nazi, as she is frequently given electroshocks and forced to sexually pleasure male staff members. Malena had been helped by a nurse, Adela, who helped her escape out of the clinic in the middle of the night, purchasing her a boat ticket back to Uruguay. In order to avoid a life of homelessness or prostitution, Malena joined a convent upon returning to Uruguay, despite not believing the faith. In the present day, Malena sees Belén in Trienta y Tres with her own children, and Malena knows that something has irreversibly changed, and wordlessly leaves the town, knowing there is no possibility of rekindling the romance. Malena then goes on a two-day bus ride to Polonio, stopping overnight in the town of Rocha and writing a long letter to the group back in Montevideo. When Malena arrives at Polonio, she observes La Proa and recalls how she had prostituted herself in order to earn the extra money. Then, Malena goes to a sheer cliff next to the ocean and jumps off of it, killing herself. After the rest of the group holds a funeral in her honor, they receive the letter in the mail a few weeks later, and learn the harrowing details of her life.

The last chapter of the novel jumps 26 years into the future, in 2013. Romina is now an elected Congresswoman, and has just legally married Diana. The group returns to Polonio, which is now a tourist destination, and somberly remembers Malena while appreciating the newfound freedoms that homosexuals have in Uruguay.

More summaries and resources for teaching or studying Cantoras.