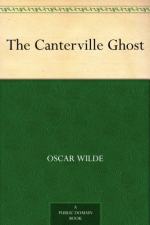 Desperately in love with the fifteen-year old Virginia Otis, the boyish Duke of Cheshire proposes after watching her win a pony race. However, his guardians pack him off to Eton, and he must wait to marry. But his impetuousness cannot be quelled. When Virginia vanishes, he insists on being part of the search party. As soon as she reappears, he smothers her with kisses. His devotion is rewarded, and Virginia consents to become the Duchess of Cheshire.

The Ghost, or Sir Simon Canterville, has haunted Canterville Chase since he was starved to death in 1584 by his dead wife's brothers. They murdered him because he had murdered his wife for the trivial reasons that she was plain and a bad housekeeper. For three hundred years, Sir Simon has frightened the inhabitants of Canterville Chase and has...