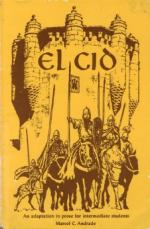 The Song of Roland, an epic roughly contemporaneous with the Cantar de mio Cid, takes place on the frontier between France and Spain, in an atmosphere of impending doom which contrasts strongly with the exhuberant conquests of the Cid.

Pierre Corneille's Le Cid, written in 1637, reflects the turbulence of France under Cardinal Richelieu and Louis XIII, more than the turmoil of Reconquest Spain.

The twelfth-century Pilgrim's Guide to Compostela offers a different view of medieval Spain: that of the pilgrim who traveled to Compostela on the Western coast of Spain to visit the famous shrine of Saint James.

Ibn Hazm, a theologian from Cordoba (994-1064), wrote the Ring of the Dove, a treatise on love. This work provides a view of the unique Arab culture that developed in Spain before the Reconquest.