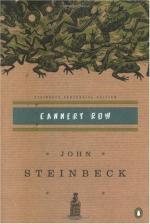 John Steinbeck
This Study Guide consists of approximately 55 pages of chapter summaries, quotes, character analysis, themes, and more - everything you need to sharpen your knowledge of Cannery Row.

This detailed literature summary also contains Topics for Discussion and a Free Quiz on Cannery Row by John Steinbeck.

Cannery Row depicts life in a depressed California fishing town, with the story culminating with the owner of a Chinese grocery, ladies in a civic-minded bordello, a household of grown-up delinquents, and assorted other characters coming together to give lonely Doc, owner/operator of a marine research facility, a tremendous birthday party.

Lee Chong owns a general grocery store that extends credit to most of the poor residents of Cannery Row. His neighbor, the flamboyant and caring Dora Flood, runs a curiously named bordello, the Bear Flag Restaurant, which plays a vital role in the community. A middle-aged tough guy, Mack, pressures Lee into renting a building to him and his homeless "boys". They christen it the "Palace Flophouse and Grill". The boys sometimes earn money by collecting specimens for Doc and his Western Biological Laboratories. In the vacant lot central to the grocery, whorehouse, and lab, the Malloys set up house in a discarded boiler and rent sleeping space in large pipes to cannery workers. The boys transform the Palace into a home, expand their numbers, and plot to throw Doc an excellent party. For this, they need to raise money.

Doc allows dim Frankie to hang around the laboratory and lets the boys talk him into finding him frogs for his research while he is busy in La Jolla. They borrow Lee's neglected Model T Ford on the condition that they get it running. They succeed, but lose the talents of their best mechanic, Gay, through the course of bizarre events. Mack is at his sharpest, finessing a conceited "captain" into letting them hunt frogs on his property. The boys enjoy themselves, collect massive numbers of frogs, and are given a gallon of good whiskey and a cute puppy to take home.

Mack perceives more quickly than others that Doc is lonely. Doc drives alone to La Jolla, and at the end of his successful octopus hunt, shockingly finds the drowned body of a beautiful woman in the surf. In Monterey, a pole skater hired as a promotion by a department store holds everyone mesmerized, and this entrepreneurial spirit is carried over to Cannery Row as Lee accepts frogs as inflated currency as they boys stock up for the party. Their new puppy takes over the household. They decide to hold the party at the lab, and while decorating, everything gets drunkenly out of hand. Doc arrives to find his home wrecked. His temper flares and he beats Mack. Doc knows better than to accept Mack's offers of clean up or restitution.

A "black gloom" descends on Mack and the boys. Doc has forgiven and forgotten, but the boys do not know this. All of Cannery Row shuns the boys and is drawn into the malaise. The boys' beloved puppy bears the brunt of it, falling ill with distemper. Her recovery, which Doc facilitates with surprising coldness, snaps the spell and the community recovers.

Planning a new party gets underway, scheduled for Doc's supposed birthday. The community-wide event requires much secrecy and care in selecting or making gifts. Doc learns of it, wisely provides for it, and leaves exposed nothing valuable or lethal. Frankie tries to steal an expensive gift and Doc cannot keep him out of prison. Suspense builds. The party begins awkwardly, warms up slowly, includes two fights: a small one that makes Mack and the boys feel useful, and a massive brawl that reinvigorates the party after Doc reads movingly from the poem "Black Marigolds", in which the heroine resembles the drowned girl in La Jolla. Doc cleans up the devastation during the "hour of the pearl", just before sunrise.

More summaries and resources for teaching or studying Cannery Row.