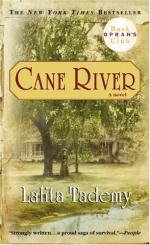 Lalita Tademy
This Study Guide consists of approximately 38 pages of chapter summaries, quotes, character analysis, themes, and more - everything you need to sharpen your knowledge of Cane River.

This detailed literature summary also contains Topics for Discussion and a Free Quiz on Cane River by Lalita Tademy.

Suzette is born a slave in 1825. Her mother Elizabeth works in the kitchen of the plantation Rosedew, and when Suzette is old enough, she learns the ways of the kitchen from her mother. While Suzette is hard-working, she is early taught the lesson of keeping her mouth shut when it comes to dealing with the white masters. As a personal companion to Oreline, the niece of her owners, Suzette finds herself on the fringe of life as a free woman, never able to fully participate but near enough to see what she's missing. When a friend of her owner takes an interest in her, Suzette feels powerless to refuse and is soon pregnant with a son by that man, Eugene Daurat. The son is named Gerent, and Suzette later gives birth to a daughter, another child by Eugene, this one named Philomene. When Rosedew's master dies, Suzette knows that her family is likely to be torn apart, and this is the case. Philomene is bought by Oreline and lives as one of only a few slaves on the farm of Oreline's husband.

Oreline manages to avoid the advances of a white man named Narcisse and falls in love instead with a slave named Clement. The two obtain permission to marry, and Philomene gives birth to twins, Thany and Bet. When Oreline's husband dies, Narcisse urges Oreline to settle debts by selling off some of the slaves, including Clement. Soon after, Philomene falls ill, and when she begins to slowly recover, she's told that the twin daughters have died. Narcisse knows that Philomene has experienced uncanny visions she refers to as "glimpsings," and he stands in awe of her for this gift. She uses it to control Narcisse to some degree, convincing him that he will have children only with her. After two childless marriages, Narcisse believes her and indulges her to some degree, building a cabin for Philomene and her growing family. As the Civil War comes to a close, Philomene and her family find themselves facing the new challenges of freedom.

Emily has a relationship with a Frenchman and bears several children by him. They live together as a family, though the law won't allow them to marry and members of the community either shun them or threaten violence. Over the years, the older women die off and the younger women of the family mature and take on the roles of leaders. Emily lives through years of upheaval and continued prejudice, seeking a peace that seems just out of reach. The story is based on factual events with records, letters, photos and other documentation.

More summaries and resources for teaching or studying Cane River.