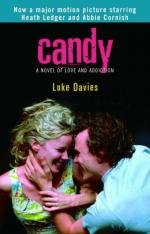 Luke Davies
This Study Guide consists of approximately 37 pages of chapter summaries, quotes, character analysis, themes, and more - everything you need to sharpen your knowledge of Candy.

This detailed literature summary also contains Topics for Discussion and a Free Quiz on Candy by Luke Davies.

Candy by Luke Davies is about an unnamed narrator and his girlfriend Candy who live in Sydney and Melbourne, Australia and are heroin addicts. The novel details their years of a heroin lifestyle, which includes scams, theft, prostitution and drug dealing until they finally hit bottom, stop using heroin and go their separate ways.

The narrator, who remains unnamed the entire novel, is a heroin addict who lives in Sydney. He meets Candy, who turns into the love of his life, and he introduces her to heroin. The narrator tries to find work any way he can to support his addiction. He stops using heroin to help his friend plant a hidden marijuana garden in the Australian outback. Yet he is too sick to help and loses the opportunity to share in the crop. He and Candy move to Melbourne. Candy meets up with her friend O'Brien, a heroin addict. The three all use together.

The narrator and Candy use heroin for nine days straight. They run out of money, so Candy becomes a prostitute. The couple also discusses having a baby. They employ a new dealer named Lester. In this time, they move to an apartment on Queens Road, a posh section of Melbourne. Candy works nights and the narrator sits around, gets high and does the occasional scam for money. They are kicked out of their apartment and move to a dingy warehouse. Candy grows tired of prostitution, so they turn to dealing cocaine to support their addiction.

They get married. The narrator continues to run scams and is arrested twice. Candy gets hepatitis and recovers a month later. Their heroin addict friend Schumann dies of an overdose. Candy then gets pregnant and miscarries at twenty-two weeks.

Candy and the narrator have an argument, which escalates into her hitting him with a glass ashtray. He receives sixteen stitches. They continue to use heroin and stop. They go through this cycle for years. On their longest detox, they only survive three days of detox illness. They are kicked out of the warehouse and live in Port Melbourne. They leave Port Melbourne and live on Alexandra Avenue. They meet an old friend named Casper who sells the narrator his heroin recipe.

The narrator cooks or freebases heroin to use and sell. He and Candy make a good profit. But they use twenty times a day and the narrator runs out of veins to shoot up. He and Candy decide to stop using. They enroll in a methadone program, have a family of cats and move to Albert Park. They then buy a farmhouse in the country with money from Candy's parents and move there. They fight constantly, Candy has an affair, then behaves strangely and the narrator leaves. When he comes back, Candy is in a mental hospital. She gets better and lives with him in the farmhouse for six months. They move back to Sydney and the narrator uses again. Candy leaves. The narrator goes into a hospital and detoxes. He takes it one day at a time now.

More summaries and resources for teaching or studying Candy.