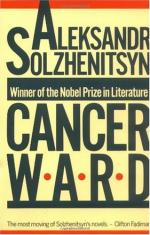 Oleg is a citizen of the Soviet Union in the 1950s. He recently spent eight years in prison camps because of Article 58, a law that gave the Soviets considerable leeway in sending unwanted people to Siberia for extended times. Oleg now lives in Ush-Terek, on the steppes, and is a topographer's assistant there. He was diagnosed with cancer when he was in the camps, but results of a biopsy were lost in government files.

Oleg is a big man with rough features. He has coal black hair that is not controlled even with repeated combing. He is not afraid to express his opinion, and has learned through his armed service experience and then his prison life, how to work the system and how to read people well.

Oleg likes to learn the story of each person he meets and has gathered a lot of knowledge because...