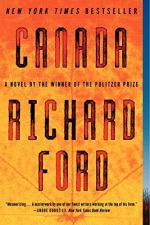 Related Topics
Independence Day
Richard Ford
The Sportswriter
Let Me Be Frank With You
Between Them: Remembering My Parents

Richard Ford
This Study Guide consists of approximately 89 pages of chapter summaries, quotes, character analysis, themes, and more - everything you need to sharpen your knowledge of Canada.

This detailed literature summary also contains Quotes and a Free Quiz on Canada: A Novel by Richard Ford.

The following version of this book was used to create this study guide: Ford, Richard. Canada. Ecco, 2012.

Canada begins with the narrator, Dell Parsons, who is now an English teacher in his 60s and about to retire, recalling the events of a short few months in 1960 when he was 15 years old. He alludes to the crimes of bank robbery that his parents committed, as well as some mysterious murders that occurred afterwards, but these unfold as the novel progresses.

Dell was the son of Bev Parsons, a bombardier in the Navy, and Neeva Parsons, a frustrated intellectual and teacher. He had a twin sister Berner, with whom he has mostly a close relationship though it could be uneven at times. Although his parents seemed to love each other for the most part, Dell remained convinced that they never should have gotten married, but they did so because of one sexual encounter that produced him and his twin sister. He attributed this mismatch to the reason that they eventually robbed a bank and ended up in prison.

The Parsons lived in Great Falls, Montana, and they had lived a scattered and unstable life because Bev had been repeatedly stationed at one Air Force base or another. In order to make extra money, Bev, an unsuccessful car salesman, became involved in a scheme with some of the Native Americans to steal and slaughter cattle from local ranchers, and sell the quality meat at a good price. At one point, as Bev functioned as the middle man between the Indians and the railroad porter to whom he sold the meat, he encountered some trouble and ended up owing the Indians money he did not have. He decided to rob a bank to pay off the debt as well as to have some extra money to provide for his family. He and his wife Neeva drove to western North Dakota to rob a bank. As the drama unfolded, Bev realized he had made a big mistake, since the bank personnel and patrons reacted underwhelmingly to his gun-wielding and threatening appearance. He stole $2,500, much less than the $10,000 he intended. For a little while, the Parsons thought the crime went undetected, and they planned to live a much more stable and quiet domestic life. Two police officers showed up one day, however, arrested them and took them to jail.

No police or juvenile officers came to look after Dell and Berner and place them in foster care or an orphanage. The children decided to visit their parents in jail and afterwards Berner ran away to San Francisco to meet up with her boyfriend Rudy while a family friend, Mildred Remlinger, drove Dell to Saskatchewan to live with her brother, the strange and enigmatic Arthur Remlinger. Dell lived in a shack on Arthur’s property and worked with Charley Quarters, a violent and predatory-like man whom Dell feared, to assist the Americans who came to hunt geese in the fall. Arthur impressed Dell in a way—he characterized him as “consistent” since it was a quality he had not previously encountered in the people in his life—but Arthur remained aloof. Dell wondered why Arthur never spoke to him, but Dell’s interaction with Arthur gradually increased. He then moved into the Leonard, the hotel that Arthur owned, to clean the rooms for the truckers and hunters who mostly stayed there because Arthur’s girlfriend, Florence La Blanc, did not think it was appropriate for some of the older hunters to stay with Dell in his shack. Dell struggled with the fact of his parents’ crime and his loneliness, but managed to create the semblance of a stable life for himself. While cleaning Arthur’s rooms one day in the Leonard, Dell found a pistol Arthur owned, and soon thereafter Charley told Dell the whole story about Arthur Remlinger.

Originally from Michigan, Arthur attended Harvard but when he could no longer afford it, begged for a scholarship. His professors refused to help him because of his reactionary political views. He left Harvard and moved to Elmira, New York and joined a group of like-minded anti-unionists who persuaded him to drive and leave a car bomb behind a union building in Detroit. The bomb exploded and killed a union leader, so Arthur fled to Canada as a fugitive. He connected with a German sympathizer who owned the Leonard and worked for him until the German’s death when he inherited the property. Now, years later, two men from Detroit arrived to confront Arthur about his crime.

Jepps and Crosley seemed not to have a real plan, but Arthur feared his concealment had come to an end. Arthur anointed Dell his “special son” whom he could exploit in connection with the killings of the two Americans. Arthur then drove Dell in the blizzard to the shack on his property and murdered Jepps and Crosley while Dell waited in the car. Although not in the shack when Arthur shot them, Dell saw the crime but could not hear it, and the soundless pantomime-like violence of the crime terrified him. Dell helped Charley and another man bury the bodies in the fields where the Americans came to shoot geese, and ironically noted that if Jepps and Crosley had lived, they would be hunting on that same spot the next day.

Florence then arranged for Dell to take a bus to Winnipeg to live with her son Roland. In Winnipeg, he attended high school, graduated, went to college, became a naturalized Canadian citizen, married and moved to Windsor where he now teaches English at a high school. He often has his students read Thomas Hardy’s novel The Mayor of Casterbridge because of its bleak fatalism, and it also addresses Dell’s feeling that he has somehow avoided punishment for his peripheral role in the murders of the two Americans.

After moving to Winnipeg, he eventually learned that his mother had committed suicide while in prison and that his sister Berner is now dying of cancer. He visits her in the Twin Cities in Minnesota. She has lived an unsettled life, but their bittersweet reunion leaves Dell with a small sense of resolution. Berner dies and the whereabouts or outcome of Bev, Arthur, Charley and the others remain unknown to him. Dell tells no one, except his wife Clare, about the murders of the two Americans, and believes that on some strange cosmic level that he will have to pay for his involvement in the crime of Arthur Remlinger.

More summaries and resources for teaching or studying Canada: A Novel.