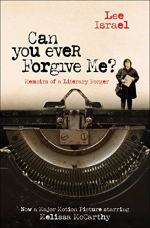 Can You Ever Forgive Me? Quotes

Every letter reproduced here, along with hundreds like them, were turned out by me — conceived, written, typed, and signed — in my perilously held studio apartment in the shadow of Zabar’s on New York’s Upper West Side in 1991 and 1992.
-- Narrator (Brick and Pigeons)

Importance: Israel describes how all of the forged letters she was accused of writing and selling were written and signed by her in an apartment with a view of bricks and pigeons. She is perhaps indicating that she never got rich off the sale of the letters, just managed to make a living.

I sold those letters to various autograph dealers, first in New York City, and was soon branching out across the country and abroad — for seventy-five dollars a pop.
-- Narrator (Brick and Pigeons)

Importance: In this quote, Israel notes how little money that she got for the forged letters that she created. When she sees one of her forged letters for sale for nearly...

Can You Ever Forgive Me? from BookRags. (c)2023 BookRags, Inc. All rights reserved.