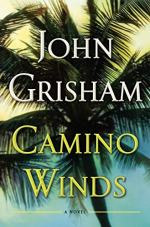 John Grisham
This Study Guide consists of approximately 54 pages of chapter summaries, quotes, character analysis, themes, and more - everything you need to sharpen your knowledge of Camino Wind.

Bay Books is the bookstore that Bruce owns on Camino Island. He considers it a hub of the community. The first floor of the bookstore is badly damaged during the hurricane, but Bruce is able to repair the store and return to business. Bruce hosts his first meeting with Lindsey and Polly in his office at the bookstore.

Karen, aka Ingrid, went to Nelson’s condo when she left Bob the night of the hurricane. Nelson called Bob to tell him that Ingrid was there and that he was going to try to take care of her. In the morning, police officers found Nelson dead. They believed that he had been killed by storm debris. When Nick was at the condo, he poked around and determined that Nelson had actually been murdered.

More summaries and resources for teaching or studying Camino Wind.